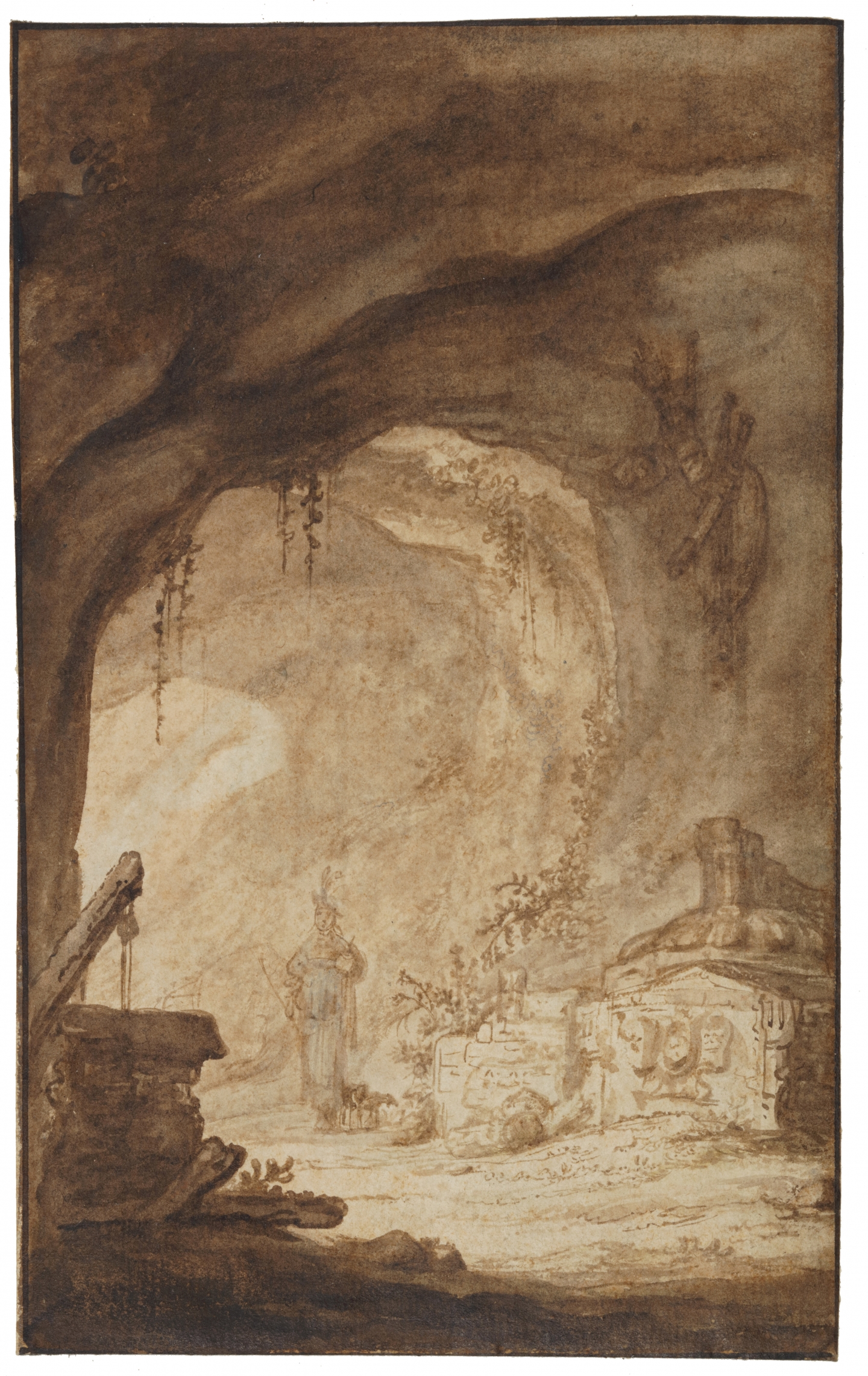 Born in a family of artisans, Rombout was apprenticed to Jan Pynas (1581-1631) for at least seven years from 1615 or 1616 and may have been active in the workshop of Lambert Jacobsz (1598-1636) also. His earlier works are landscapes and history paintings which show the influence of his master Pynas. Shortly afterwards, van Troyen chose his own path and specialised in painting biblical and mythological landscapes with grottoes. Although his oeuvre shows great influence of Italian landscapes and especially grottoes, Rombout never sojourned in to the country himself. Rombout married twice and was father of at least seven children of which only one daughter reached the age of adolescence. He was a very productive painter, although his life was unfortunately dominated by poverty and financiel debts. This long history of financial misfortune eventually led to forgery with his obituary, after which van Troyen fled to the city of Leeuwarden, fleeing away from his creditors and filling the gap in the art market that arose due to the plague of 1637 in Leeuwarden.[1]

The origins of grotto painting were founded in Utrecht, probably with Carel de Hooch as initiator and Abraham van Cuylenborch and Dirck Stoop as two of his most productive followers. The most common sources for this genre of paintings are Diana's retreat in Ovid's Metamorphoses and Mary Magdelena. Since the early days of civilization caves had been used both as dwellings and places of worship and Christianity adopted the cave sanctuaries from the Hellenic world. Caves were also used as human burial sites with chambers carved into the rock or the use of sarcophagi and some of them became pilgrimage sites with the grotto of Nymph Egeria in the Via Appia Antica near Rome as one of the most frequently depicted. Another and more common source were the paingints by the artists from the Southern Netherlands such as Joachim Patinir (1475-1524), Cornelis van Dalem (1518/38-1573/76) and Joos de Momper II (1564-1635).

Grotto painting experienced its heyday roughly from the early 1630's to the mid-1650's and was an affordable substitute for an actual voyage to Italy, with its glorious landscape, its caves and its fascinating ancient remains. The phenomenon of grotto paintings is associated with the Caravaggisti movement and the popularity of Italianate landscapes, as well as the longstanding tradition of Utrecht artists traveling to Italy and absorbing its influence. Since it is clear that grotto paintings functioned as a substitute for an actual trip to Italy, they must be understood in the wider context of the Grand Tour. This provides even more evidence for the need to see the Grand Tour in a wider perspective, with its roots in the early sixteenth century.[2]

In Amsterdam de Hooch was followerd by Adriaen van Nieulandt and Rombout van Troyen. Van Troyen chose not to depict the classical scenes in his grottoes, but used the scenery as decor for unusual stories and myths. He painted The Raising of Lazarus several times, which blinks an eye on his very own ficitve death in Amsterdam and resurrection in Leeuwarden. His grottoes are characterised by their small sizes, sinister atmospheres and staffage with tiny figures, altars, statues and tombs, which perfectly matches with our drawing. His earliest dated work dates 1627, the year in which he became a Master.[3]