Hermanus Numan (Ezinge 1744-1820 Amsterdam) The ruins at the Steenschuur, Leiden, after the gunpowder disaster of 12 January 1807 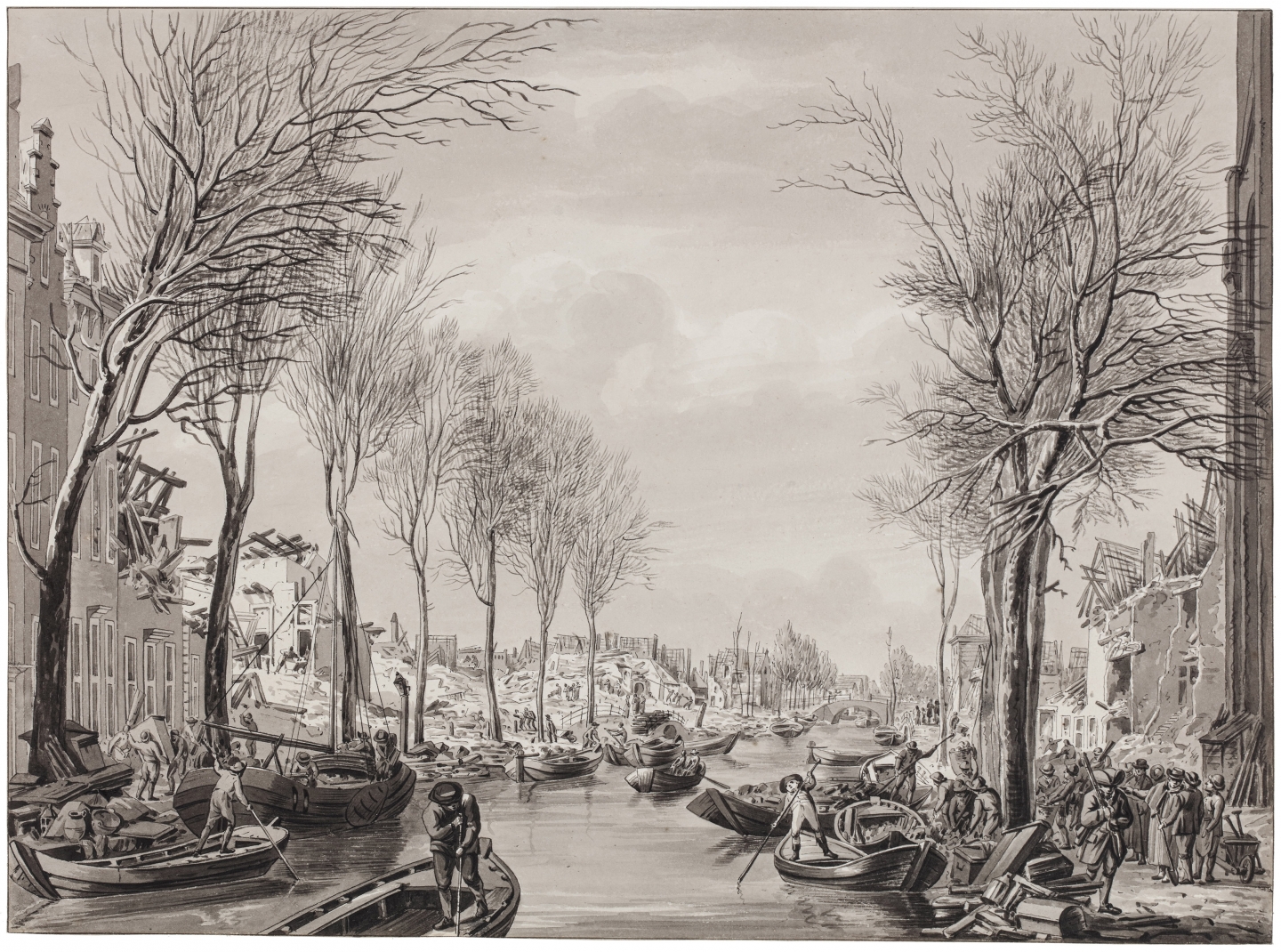 Born in the village of Ezinge in 1744, the young Hermanus Numan became enchanted by the painting activities in his father's lacquer workshop in Groningen. His parents carefully chose to give Herman an apprenticeship to the wallpaper manufacturer Jan Augustini (1725-1773) in Haarlem where Egbert van Drielst (1745-1818) was an apprentice as well. After this apprenticeship of four years Herman retruned to Groningen. From there he travelled to Paris with the compliments of Professor Petrus Camper (1722-1789) and met the engraver Le Bas (1707-1783).

Herman returned to The Netherlands and settled in the thriving city of Amsterdam where he met Jurriaan Andriessen (1742-1819). The artists collaborated in fabricating the stage screens for the new Amsterdam theater after the fire of 1772. Numan made a series of twenty-four printdrawings depicting "Hollandsche Buitenplaatsen" (Dutch Country Seats) in 1797 and was director of Felix Meritis.[1][2]

The city of Leiden shook and trembled due to a huge explosion which took place at "Het Steenschuur" on 12 January 1807. A ship on it's way between the cities of Haarlem and Delft, carrying the cargo of no less than 37.000 pound of gunpowder exploded in the midst of the day, probably due to a careless cook. More than 200 buildings were turned into ashes and over 150 deads and 2000 wounded were counted amongst the citizens.

The Netherlands were still under French occupation by then and king Lodewijk Napoleon, brother to Napoleon Bonaparte visited the devastated area within five hours, donating 30.000 guilders out of his private-posessions for local aid and rebuildings. The city of Leiden was exempted from taxes for the next ten years (untill 1817 when The Netherlands were liberated). Hereafter the transport of loads of gunpowder was no longer allowed in densely populated areas.

Numan shows the site of disaster seen from the "Groenebrug" facing towards the "Nieuwsteegbrug" with the so-called small-ruin on the right, where the Kamerlingh Onnes Labaratory was built which now houses the Law Faculty of the Leiden University and the large-ruin on the left where the Van der Werf parc was built.

Numan also drew the site of disaster seen from the opposite direction, seen from the "Nieuwsteegbrug" facing towards the "Heilige Lodewijkkerk" and the "Groenebrug".[3][4][5]

These gunpowder drawings were highly esteemed and very much wanted, as exemplified by the fact Numan produced several replicas of the drawings nowadays preserved in the collections of the Rijksmuseum Amsterdam and City Archives of Leiden as well as Reinier Vinkeles who engraved after the both of them.[3][4][5][6]