Johannes Huibert Prins (The Hague 1757-1806 Utrecht) View of a Dutch city with canal and statue of Laurens Jansz. Coster. 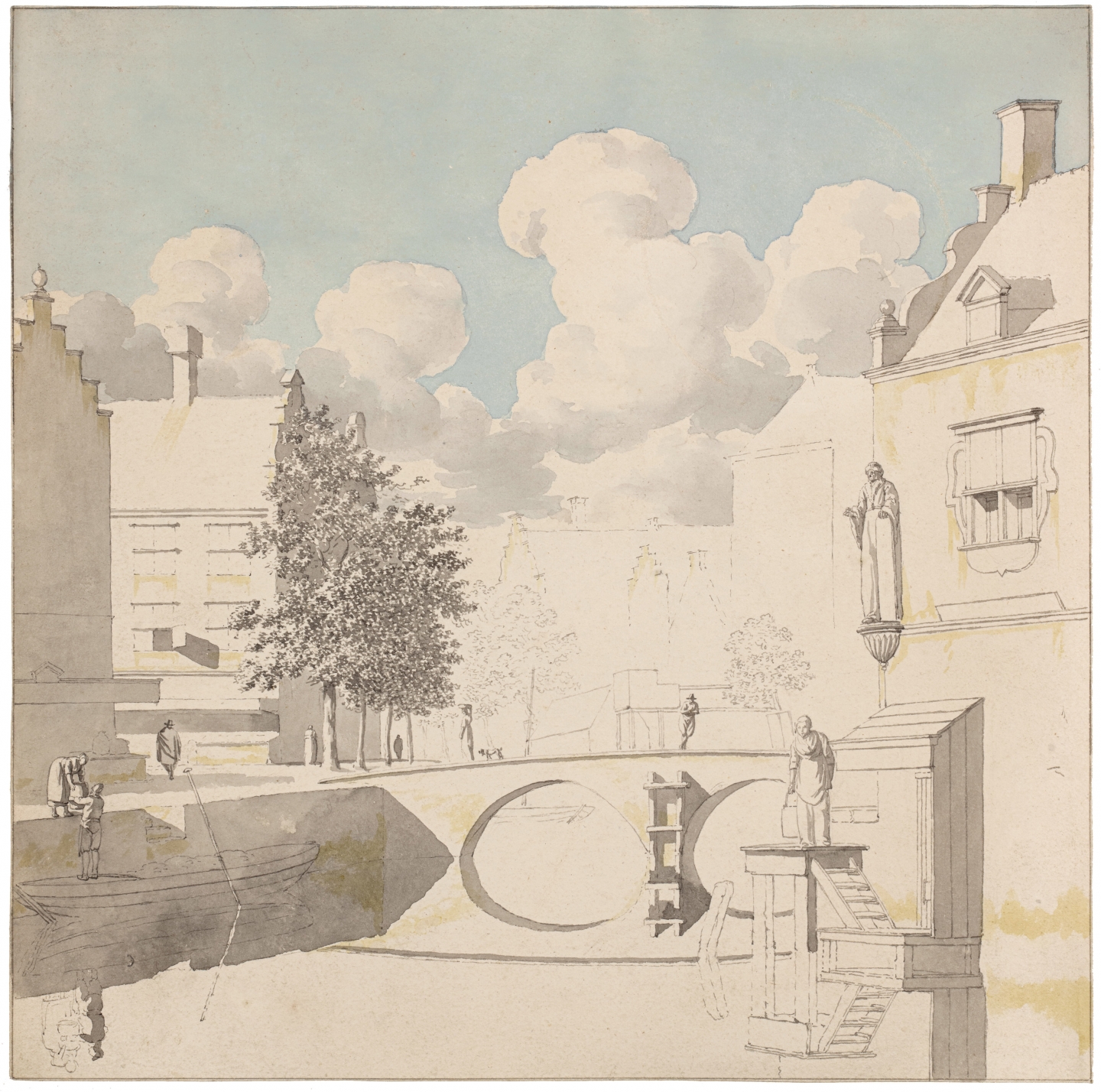 Raised in a well-to-do family, the young Johannes was intended to become a Doctor Medicinae, and eventually enrolled to the studies of Philosopy where he became Doctor Philosophiae (Niemeijer), although his interest for drawing and painting was much more passionate.[1]

After completing his studies he fully devoted himself to an artistic career. Stimulated by his direct environment, the self-taught artist Prins traveled to Brabant and Paris where he drew many cityscapes. His drawings are mainly in the tradition of seventeenth century Old Masters Jan van der Heyden (1637-1712), Job (1630-1693) and Gerrit Adriaenszoon Berckheyde (1638-1698) and Adriaen van de Velde (1636-1672) whose compositions he also copied.[2][3]

The cityscapes by Prins are often capriccios of existing buildings which he used for free compositions after own inventions, just like the present drawing which shows a sunlit city with the statue of Laurens Jansz. Coster on the corner of a non-existent building. The Rijksmuseum preserves a sketchbook with 175 pages of drawings of architecture studies Prins made in the cities of Delft, Utrecht, Nijmegen, Harlem, Hoorn, Voorburg and The Hague. He would merge these sketches later into his own composed capriccios just like the present sheet. Matthias de Sallieth engraved after Prins.[4]

For long time the fifteenth century Harlem sacristan Laurens Janszoon Coster was believed to be the inventor of bookprinting, although nowadays it is well known that Johannes Gutenberg deserves the honour. Coster's merit and invention was the development of the use of separate letters instead of one single woodblock for a single text page.

In this drawing, which is fully signed and dated on the verso, Prins has concentrated on catching the sunlight and shadow, just like Josephus Augustus Knip would do slightly later during his Grand Tour in Italy, resulting in a composition which retains a maximum of optic power.

Johannes' tumultuous character was one with contradictive qualities, as he was praised for his orations which made him a Regent of Confrerie Pictura The Hague in 1784, where he would sneak off with the cash box later on. During his later years Johannes lost grip of his artistic career due to abusive drinking and is assumed to have drowned in 1806.

Works by Johannes Huibert Prins were highly esteemed during his lifetime and he was collected by important contemporary collectors like Hendrik Muilman (1743-1812), Jacob Helmolt (1747-1808) and Cornelis Ploos van Amstel (1726-1798).