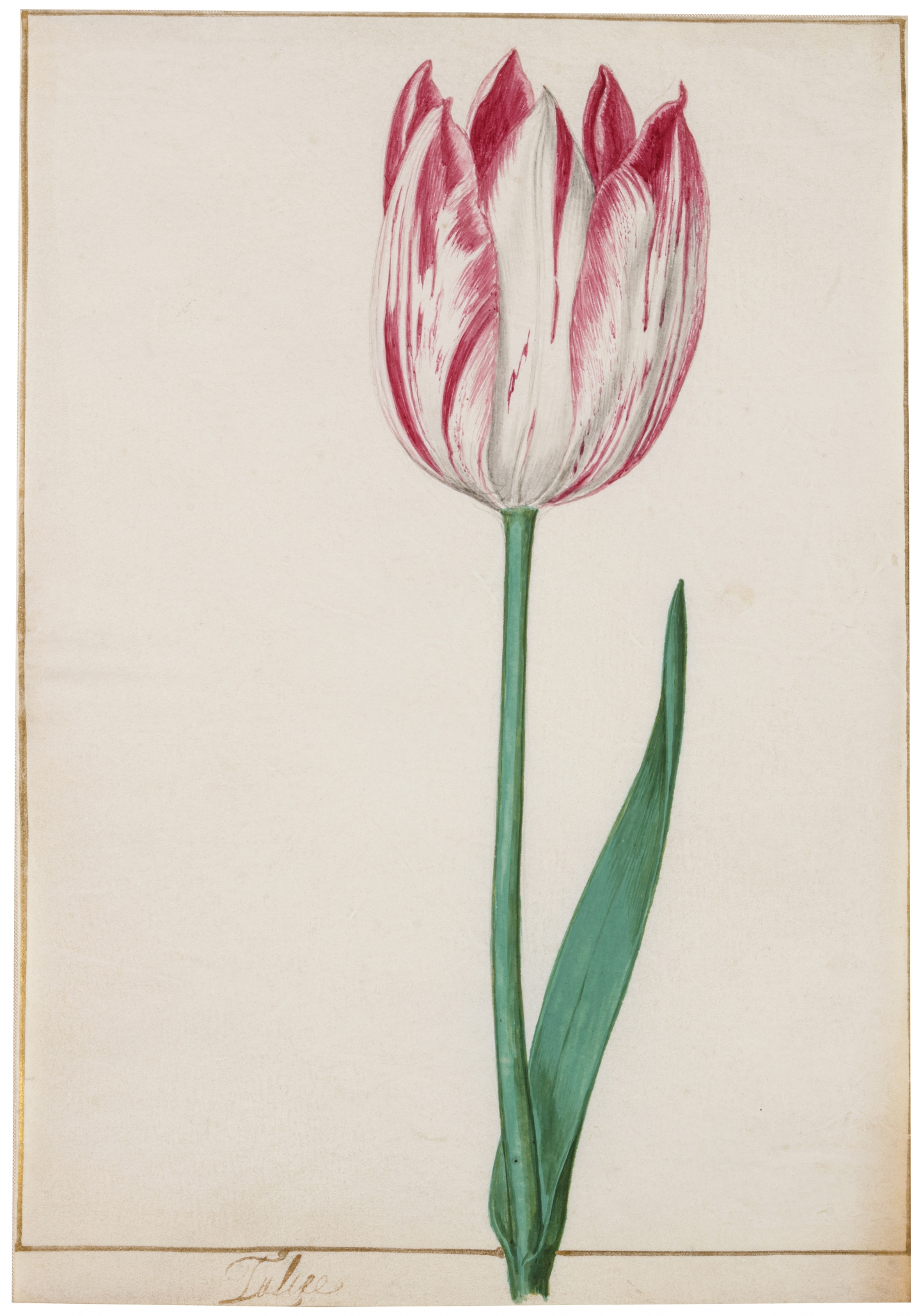 Of notably interest and comparison is the album with drawings on vellum by Jacques de Gheyn II, preserved in the collection of Fondation Custodia, all 22 meticulously drawn on vellum and with borders in goldpaint. Fol. no. 20 shows a tulip and two studies of leaves with the stem of the tulip crossing the border in goldpaint just like our drawing on vellum by Pieter Holsteyn II which suggests Pieter might have been aware of the album and it's contents.[2]

This very finely preserved drawing of a tulip on vellum originally was part of the Pieter Holsteyn II album (see artwork no. 211208 at the RKD).

The album was bound in parchment, containing two loose pages in the front with an inscription and a partial table of contents and also 197 drawings of flowers, including 66 tulips, in watercolour and gouache on handmade paper, partly provided with a watermark. The drawings often had an inscription in pen in brown ink below the plant, bearing the name of the flower, and were loosely inserted between the 202 leaves of the album, which were numbered in pencil. When Sam Segal studied the album in July 1985 at the request of Christie's in London, it still formed a unit. Shortly afterwards the sheets were taken out of the album and sold in parts, among others at the following auctions: Amsterdam (Christie's) November 18, 1985, lot nrs. 106-137 [63 Leaves], New York (Christie's) January 14, 1986, Lot nrs. 222-245 [52 Leaves] and New York (Christie's) January 13, 1987 [48 Leaves]. Parts of the drawings offered at these three auctions, 49 sheets to be precise, were bought by one buyer (Niall Hobhouse) who had them auctioned as an album at Sotheby's in London on April 25, 1989, lot 48. Also in this same auction 12 more sheets from the same original album were auctioned.

This drawing was loosely inserted between pages 184 and 185 and it is one of the very few tulip drawings by Pieter Holsteyn II on vellum.

Media:
Watercolour, pen and grey ink, grey wash, pencil, gouache on vellum, goldpaint framing lines
Dimensions:
211 x 146 mm
Annotations:
Titled "Tulipe" with goldpaint on the lower left.
Provenance:
The Pieter Holsteyn II album (artwork no. 211208 at the RKD), which was bound in parchment, containing 197 drawings of flowers, including 66 tulips, in watercolor and gouache. The drawings were loosely inserted between the 202 leaves of the album. When Sam Segal studied the album in July 1985 at the request of Christie's in London, it formed one unit, shortly afterwards the sheets were taken out of the album and sold in parts. This drawing was loosely inserted between pages 184 and 185.