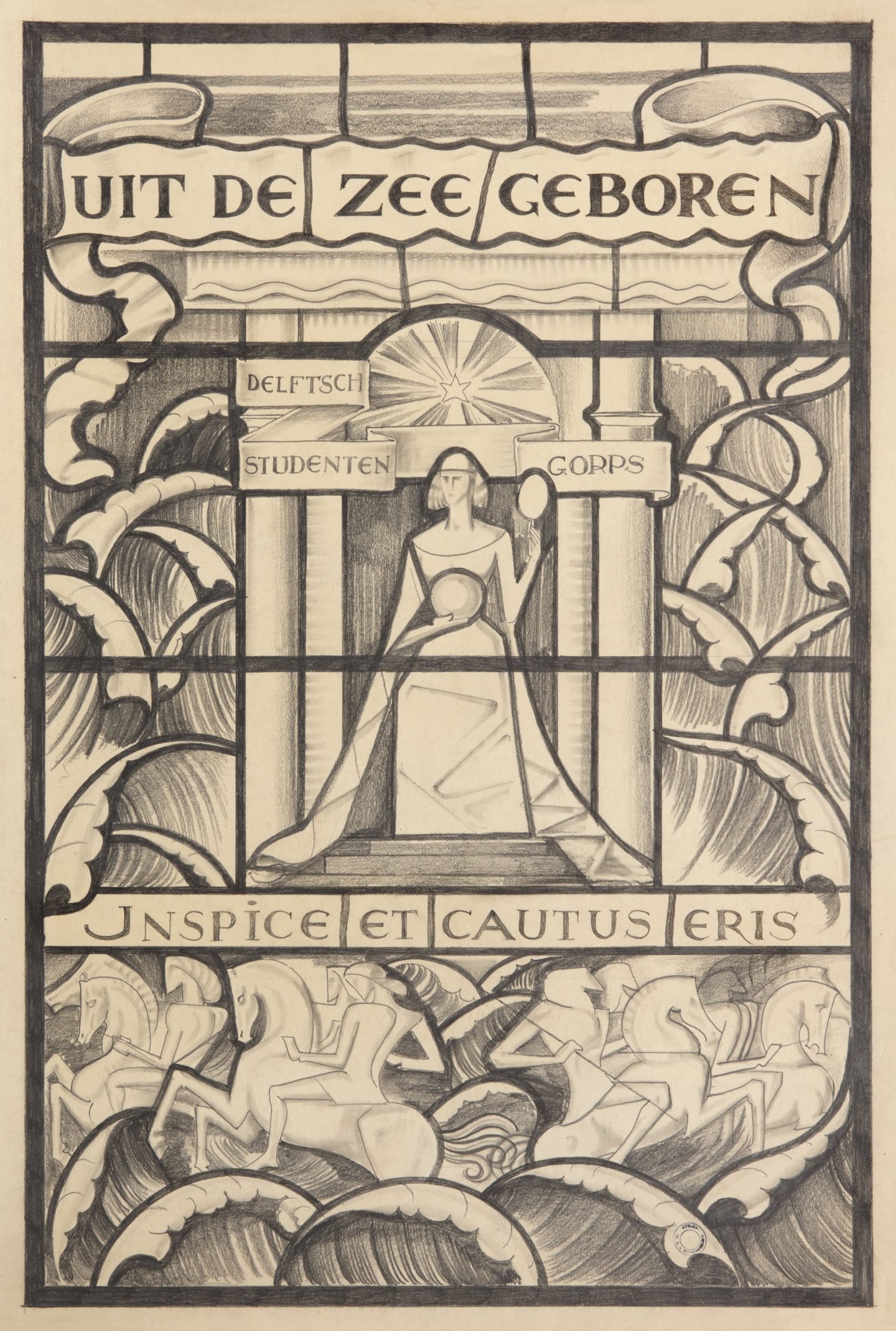 Educated at young age by his mother and later on by J.C. d’Arnoud Gerkens, Willem van Konijnenburg studied at the The Hague Academy of Arts. Being a well to do patriciate and famous for his dandyesque presence at party’s, Willem's talents flowered only at later age when he was already a man of middle-age in 1917. Initially influenced by The Hague impresionists and the School of Barbizon, van Konijnenburg decided to break with these traditions and had an artistic identity crise around 1900.

He was an intellectual idealist with classicist influences and developed his characteristic style with geometric patterns. Terms like harmony, ethics and aesthetics were the spearheads of his policy when he created this new style and personal image. He was influenced by the Italian Renaissance like Leonardo da Vinci as well.[1]

Thanks to his mecenas and collector, the dealer in tea and mint, Frits van Kooten Kok, van Konijnenburg became a completely financially independant artist and he established his new image with the exhibition of thirty works from the private-collection of van Kooten Kok in 1917 at Kunstzaal Kleykamp, The Hague. This exhibition acquired him the status of artists like Jan Toorop, Johan Thorn Prikker and Richard Roland Holst. Other stimulating and important contacts for van Konijnenburg were the art critic Albert Plasschaert and the poet P.C. Boutens. Untill then, van Konijnenburg was mostly known as a painter and draughtsman and it took untill 1924 before he got his first monumental order, a stained glass window “Het Wilhelmina-raam” for the Nieuwe Kerk Delft.

In 1921 van Konijnenburg succeeded Albert Roelofs who died at new years eve as teacher of Queen Wilhelmina and became her personal teacher. This resulted in the order for a stained glass window “Het Wilhelmina-raam” (the Wilhelmina window) on which van Konijnenburg worked from 1925 on and which he completed in 1927. The window being a personal gift from the philantropist Edward Bok.[2]

Besides her Royal Majesty Queen Wilhelmina, van Konijnenburg was teacher of many well known artists like Johan Briedé, Jan Frank Niemantsverdriet, Rie Cramer, Jeanne Bieruma Oosting and Willem van den Berg. From 1928 untill his death in 1943, van Konijnenburg almost exclusively worked on monumental commissions. Several of these being stained-glass designs for the Nieuwe Kerk Delft and Nieuwe Kerk Amsterdam. After he completed the Wilhelmina window, van Konijnenburg was established as aesthetic advisor of the stained-glass window commission of the Nieuwe Kerk, Delft. Aside from the Wilhelmina window, he was commissioned to design no less than ten windows for the choir. As the Nieuwe Kerk is the mausoleum for the Oranje-Nassau Royal Family as well as the burial place of Hugo de Groot, subjects for the windows were chosen which are related to and would honour them.

The Delftsch Studenten Corps offered the Geuzenraam to the Nieuwe Kerk on celebrating their seventeenth lustrum. Van Konijnenburg designed the window and made the cartoons as well, of which our drawing is one. Subject for this window are the importance of the sea to the freeing of the Republiek der Verenigde Nederlanden (Dutch Republic) and the Geuzen and their role in the battle against Philips II. The central figure of the window being Willem van Oranje, who plants a freedom flag. The stained-glass windows were produced by Luc Knoll in 't Prinsenhof and they were presented on 1 July 1933.[3]


I would like to thank Ewoud Mijnlieff, Haags Gemeentearchief for bringing the Geuzenraam, Nieuwe Kerk Delft under my attention.[5]