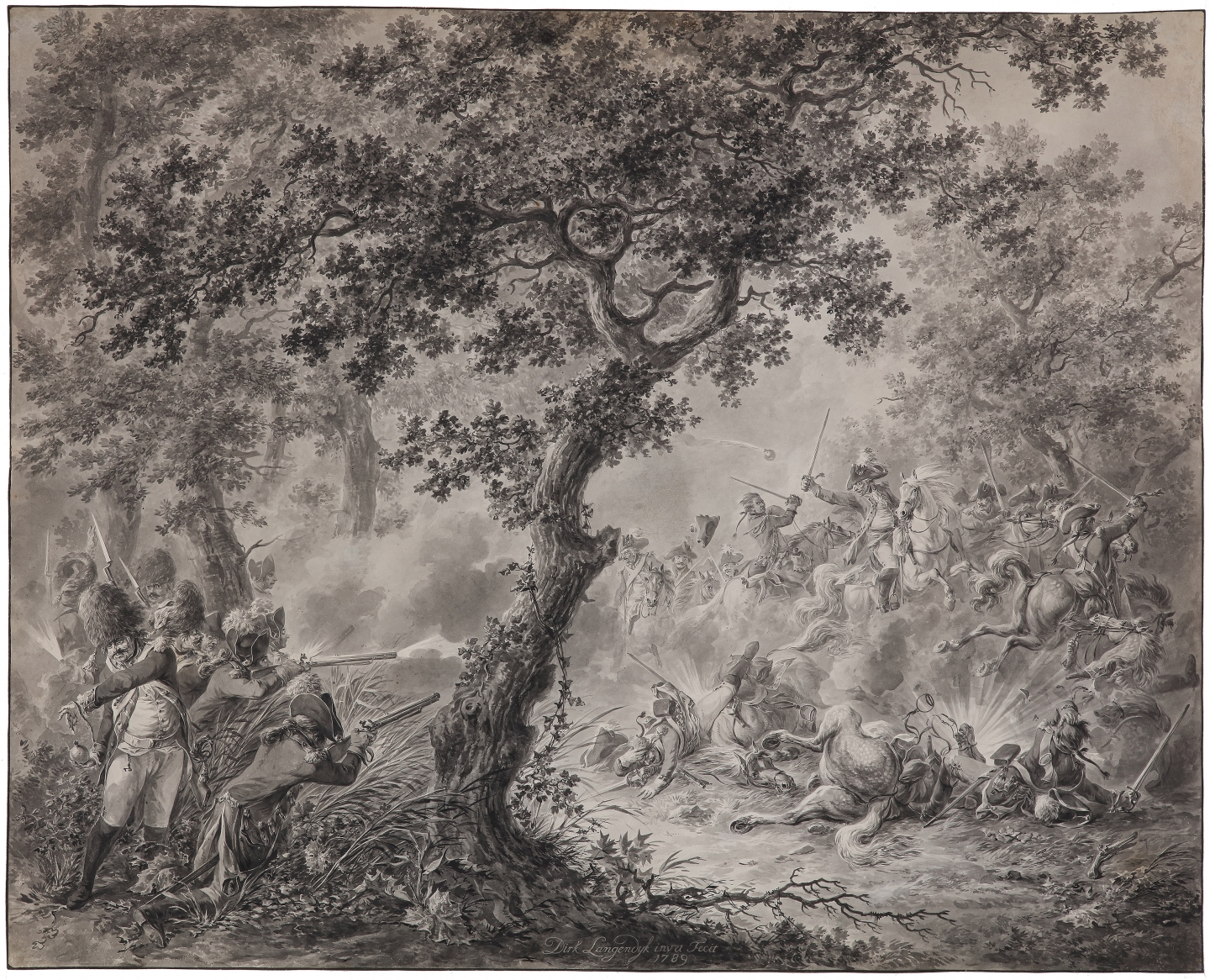 Dirk Langendijk (1748-1805) and his son Jan Anthonie (1780-1818) are the most important Dutch draughtsmen of military scenes and uniforms of their time. Often their works are even the only source in this area. Father and son Langendijk are both known as inventive artist when it comes to scenes with and uniforms of the military, which sometimes makes it difficult to distinguish between their drawings. Furthermore, Dirk left unfinished and unsigned work after his death that was later finished and signed by Jan Anthonie.

In this drawing the scene with soldiers in the lower left corner largely corresponds with a drawing by Dirk Langendijk from 1799, of which there is also a print. This picture is described as a scene from the Battle at Bergen in North Holland in 1799, during the British-Russian invasion, of which Dirk and Jan Anthonie have made many drawings and prints. However, remarkably the drawing discussed here was made in 1789, according to the dating by the artist. Therefore, theoretically this could not have been the Battle at Bergen.

What also indicates this is the headgear, fur caps, of the grenadiers in between the soldiers that have been depicted on the lower left. As far as known, the grenadiers of the Batavian army (1795-1806) did not wear fur caps, neither in 1789, nor in 1799. However, these could have originated in Langendijk’s fantasy, which happened more often, and also fur caps could have been continually worn by former State regiments during the Batavian Republic, which was not uncommon, but even in that case the dating of the drawing does not accurate.

It is more likely that this concerns a fighting scene from 1787, and more specifically the fight at Vreeswijk on 9 May of last mentioned year, close to Utrecht, where patriots clashed with the State army. Probably the troops of the patriots have been depicted on the lower left and the State cavalry on the right. It is known that the Utrecht patriots had grenadiers with fur caps and hunters (equipped with muskets), which are both depicted in the drawing. The State troops had three regiments of cavalry at their disposal in the area. Furthermore the drawing clearly depicts that the State troops, that have ambushed, suffer defeat, which is historically correct. Since Langendijk was a patriot himself, this event will have appealed to him. The defeat of the State army in 1787 was a big humiliation and the events in this year, also known as the year of the Dutch Revolution, mark the beginning of the end of the Dutch Republic and more specifically the viceregal regime, and also the State army, which was eventually completely defeated by the French who invaded the Dutch Republic under the guise of aiding the Dutch patriots.[1][2][3][4]

The collection of the Rijksmuseum in Amsterdam contains a drawing of Dirk Langendijk that seems to be related to this piece, which is dated 1787.[5]