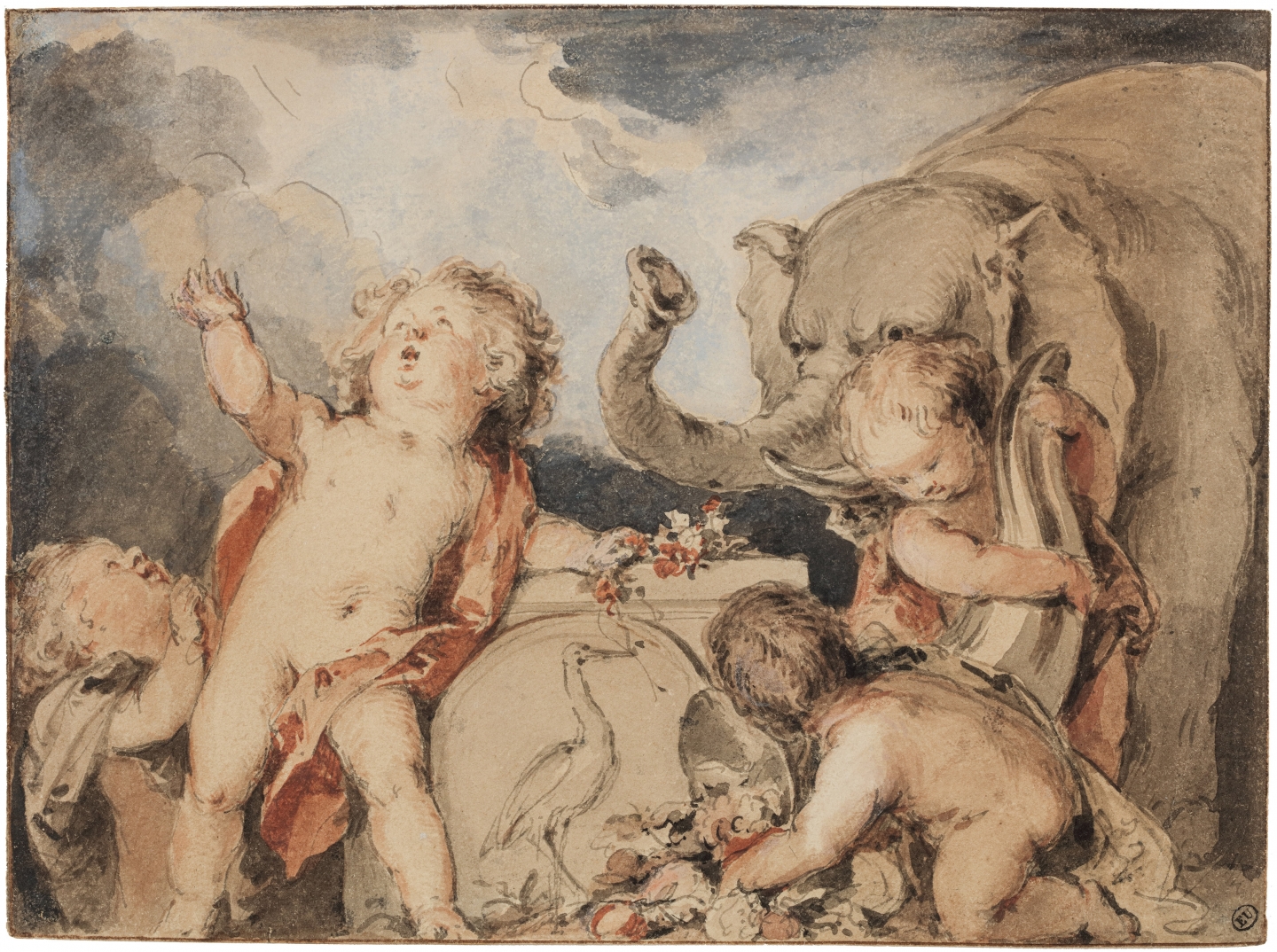 Jacob himself owned two houses in the Keizersgracht, number 383 and 385. The base for these traditions originates from the era of Stadholder King William III. The terminology "Witjes" (grisaille imitations of reliefs) named after the typical bas-relief drawings and paintings for which de Wit became renowned. De Wit was trained at the Academy in Antwerp and returned to Holland between 1715 and 1717 and specialized in mythological and allegorical subjects. Jacob had no real pupils and the only two artists mentioned as having been taught some basics by him are Johannes de Groot and Gerrit Dadelbeek. He married Cornelia Leonora van Neck in 1720 and the couple remained childless.

This very important and until recently unrecorded drawing in colour by Jacob de Wit (which is a rarity by itself), is an allegory on the city of The Hague. Centrally depicted is the coat of arms for the city of The Hague with the stepping stork with the eel of saber in it's beak. The setting enriched with an elephant as symbol of wisdom and power and putti with a cornucopia with flowers symbolizing the affluence of the city of The Hague in the eighteenth century. This drawing was unknown untill 2019, thus far unrecorded and an important discovery and addition to the drawn oeuvre of de Wit. It very well might have been an upper door design, possibly ordered by Jan Hudde Dedel, Mayor or The Hague.

Jan Hudde Dedel (Amsterdam, 1702-The Hague 1777) was the mayor of The Hague for twelve tenures between 1735 and 1777 and bought countryhouse "Outshoorn" in 1735 for 11.000 guilders. In 1767 he also bought the adjacent countryhouse "Steenvoorde". After his death in 1777 both countryhouses were bought by Jacob van Vredenburch, who also acquired "Overvoorde" from the heritage of Jacob van der Dussen and Catharine van Vredenburgh (21 July 1777).

This allegorical drawing may have been an overdoor-design for one of Hudde Dedel's countryhouses just like the two designs for the countryhouse "Outshoorn", (depicting "The allegory of Spring and Summer" and "The allegory of the five senses") which we sold to the City Archives of The Hague (Gemeente Archief Den Haag) in 2016. The drawing also may be a design used for Huis Dedel (House Dedel, Prinsegracht 15 The Hague), where Jan Hudde lived from 1733 until his death in 1777. Jan Hudde commissioned Jacob de Wit for several ceiling paintings of which a few designs have been preserved.