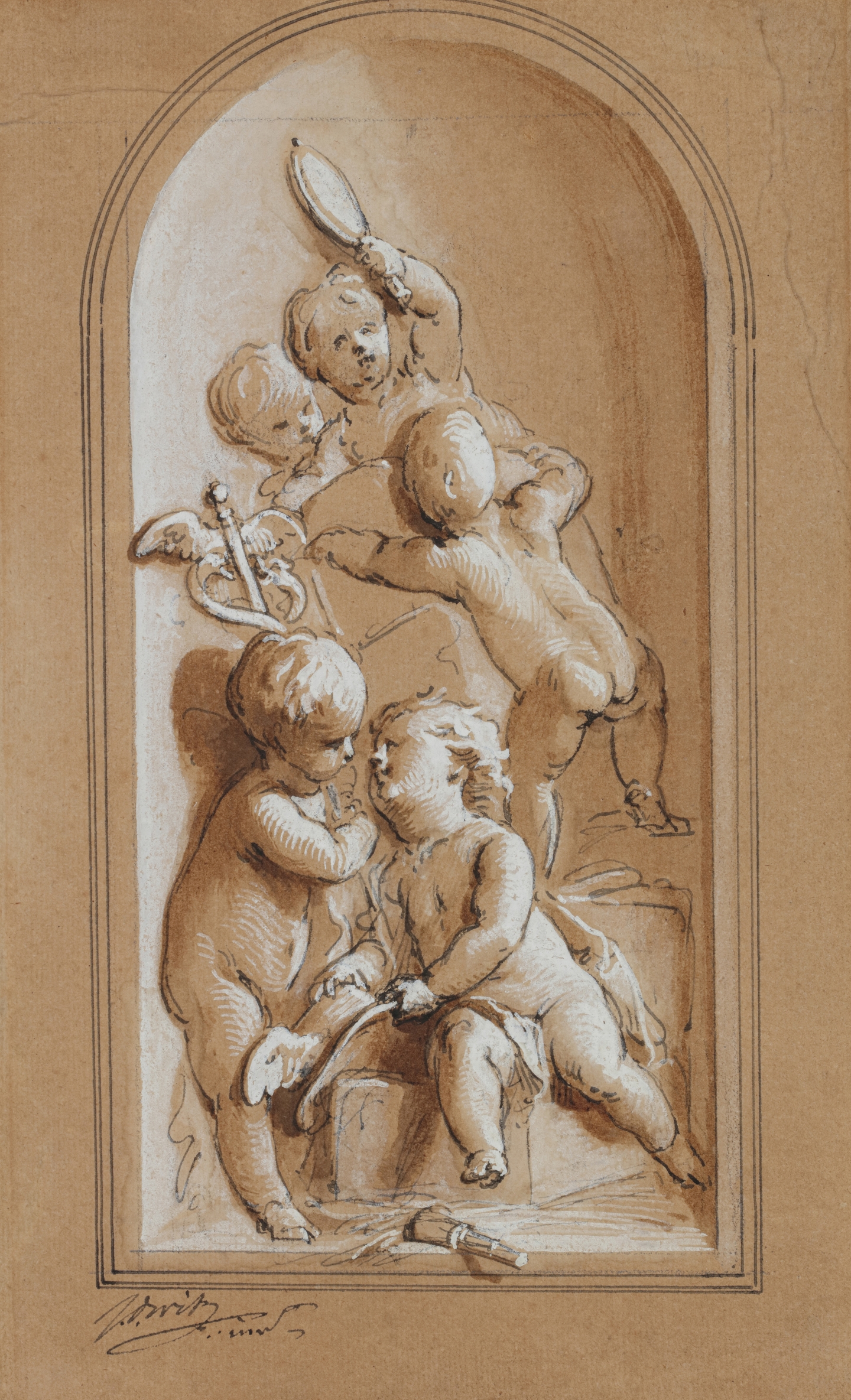 The base for these traditions originates from the era of Stadholder King William III. The terminology "Witjes" (grisaille imitations of reliefs) named after the typical bas-relief drawings and paintings for which de Wit became renowned. De Wit was trained at the Academy in Antwerp and returned to Holland between 1715 and 1717 and specialized in mythological and allegorical subjects. Jacob had no real pupils and the only two artists mentioned as having been taught some basics by him are Johannes de Groot and Gerrit Dadelbeek. He married Cornelia Leonora van Neck in 1720 and the couple remained childless. Jacob himself owned two houses in the Keizersgracht, number 383 and 385.

Bearing in mind the above mentioned two addresses where de Wit lived, the present drawing is almost a neighborly commission.

Jacob Alewijn Ghijsen (1696-1760) was one of the wealthiest tradesmen of Amsterdam in the first half of the eighteenth century acquiring a fortune among others as a WIC-tradesman. He owned several country seats among which was "Bosch en Hoven" in Heemstede/Haarlem which he bought in 1726 for 15.000 guilders from mr. Jan Dutry, son of Benjamin Dutry, heer van Haeften and governor of the East-Indian-Company. Jacob de Wit was commissioned to paint the supraportes for "Bosch en Hoven" as well as four supraportes for it's tea pavillion where he painted the four seasons, dated 1733. When Jacod de Wit died in 1754, Jacob Alewijn Ghijsen was one of the two persons who were indebted to him.[5][6]

Apparently Jacob Alewijn Ghijsen was very pleased by de Wit's work for "Bosch en Hoven" as he bought Keizersgracht 274 in 1740 and commissioned de Wit for at least one supraporte in 1741 for which our drawing is the design.

The original supraporte painting was auctioned after Jacob Alewijn Ghijsen's death and the sebsequent sale of the estate after which the painting was acquired for the estate "Duin en Kruidberg" in Velsen where it is preserved until today.[7]

Another "Allegory on the Trade" by Jacob de wit preserved in the collection Stiftung Weimarer Klassik und Kunstsammlungen, Weimar (Thüringen).[8]

SOLD:
Sold to the City Archives of Amsterdam