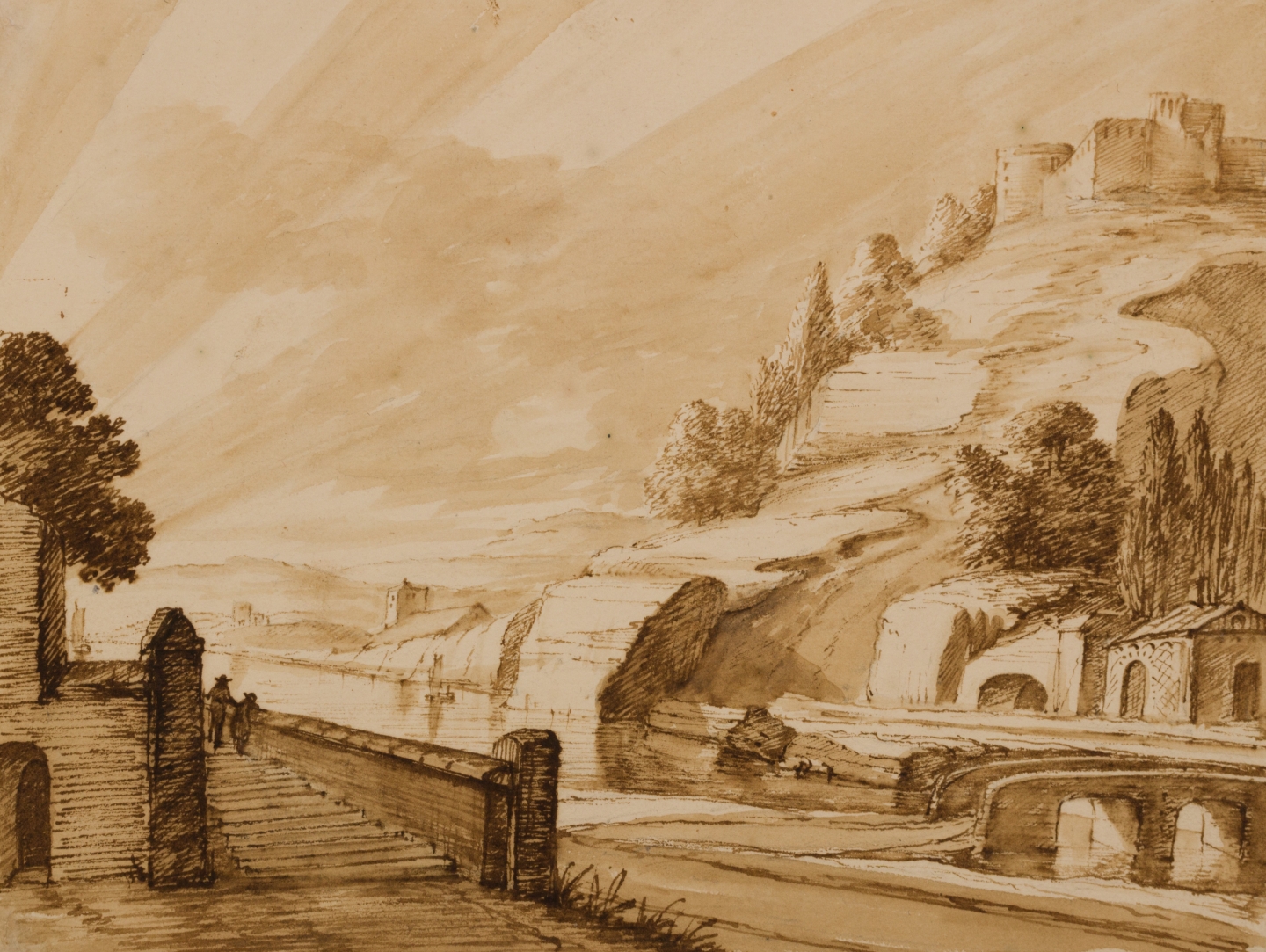 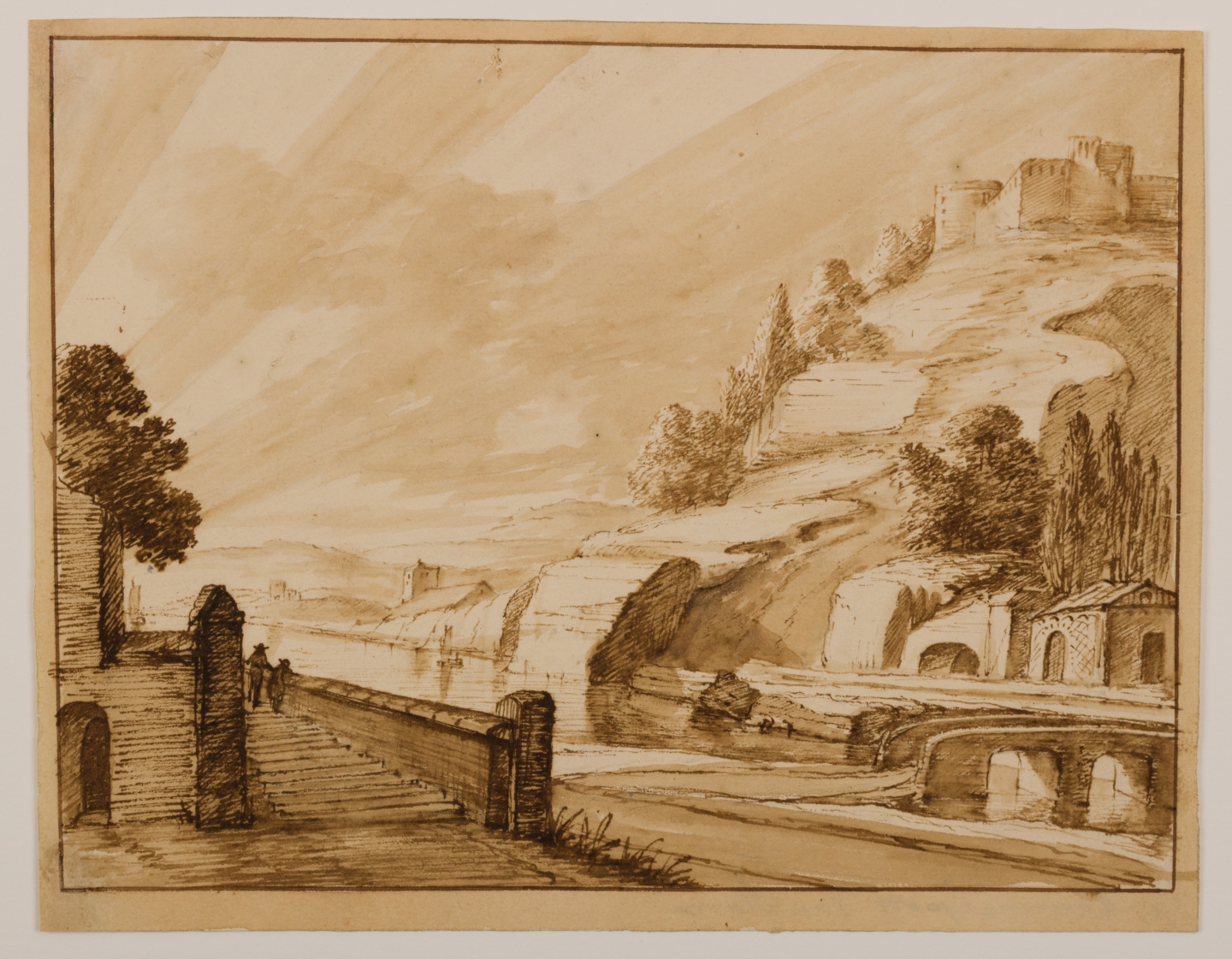 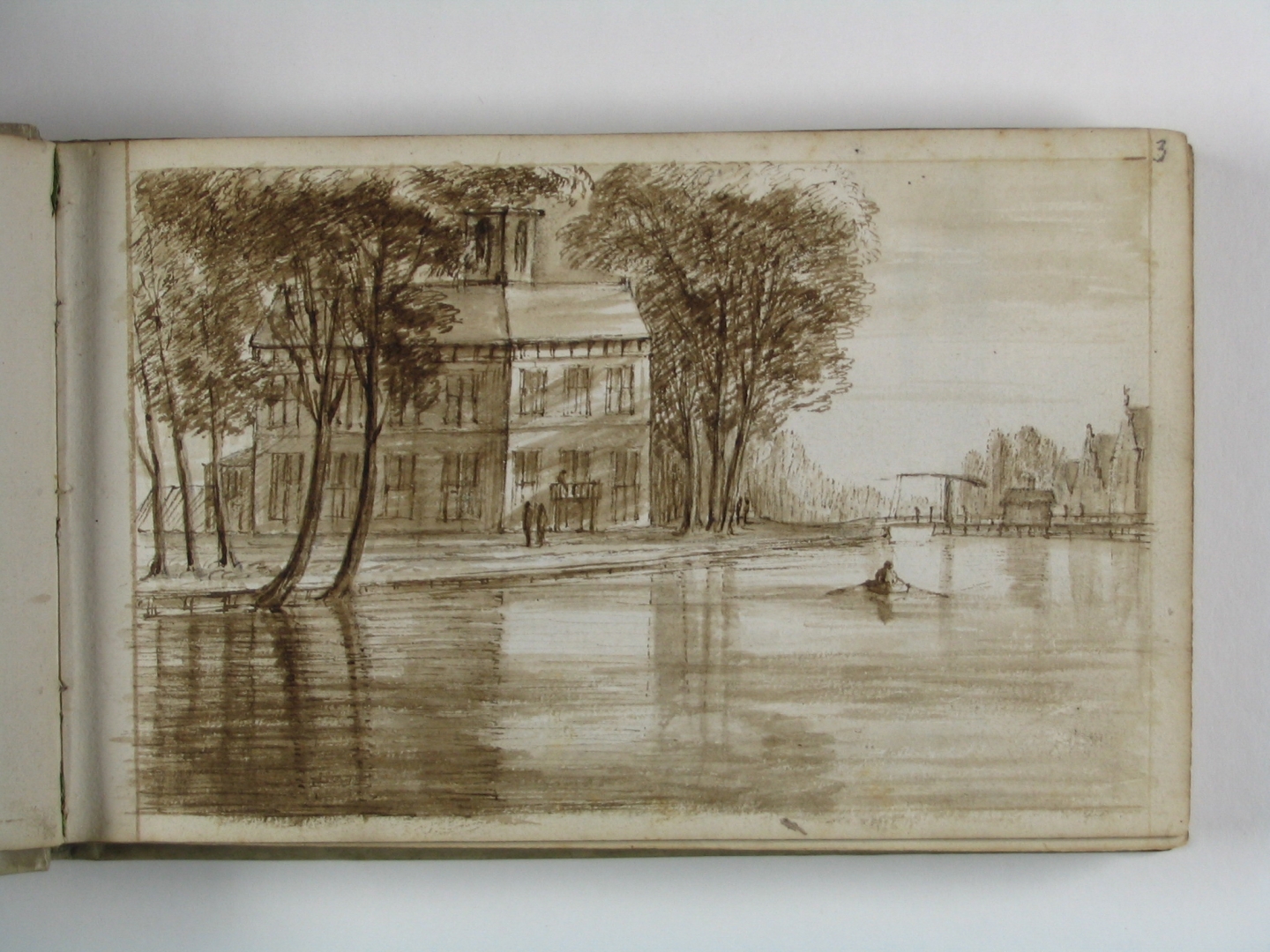 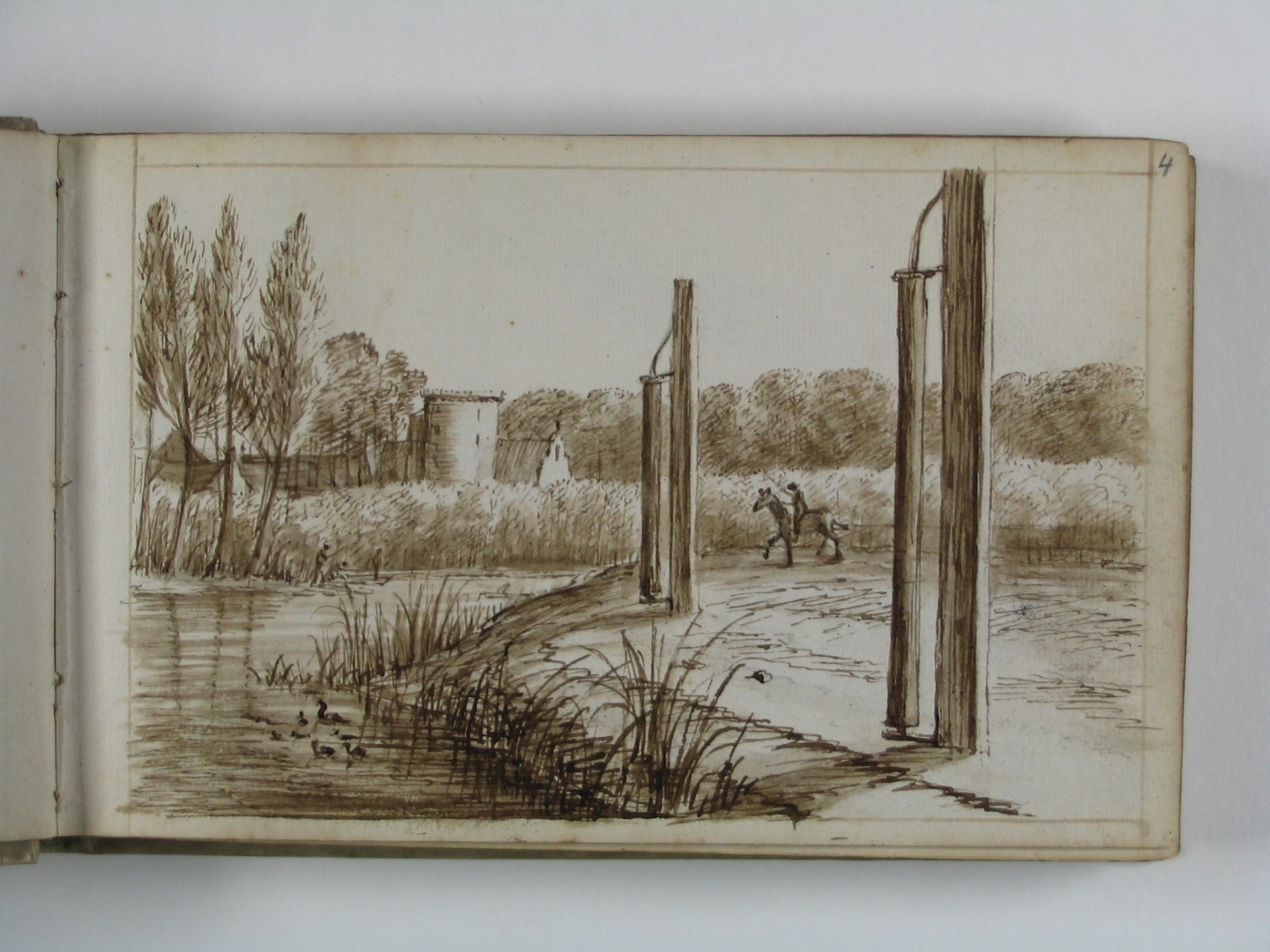 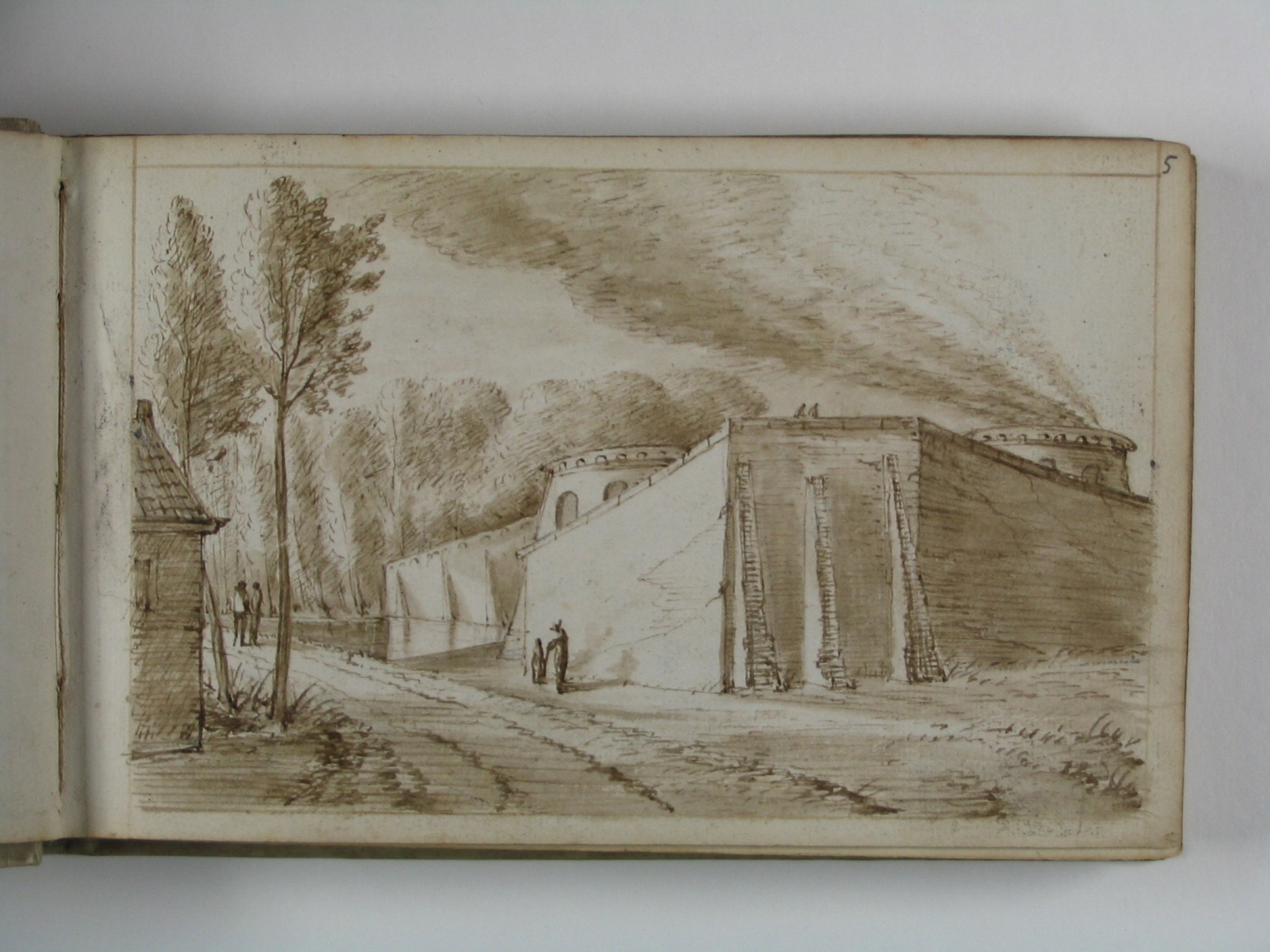 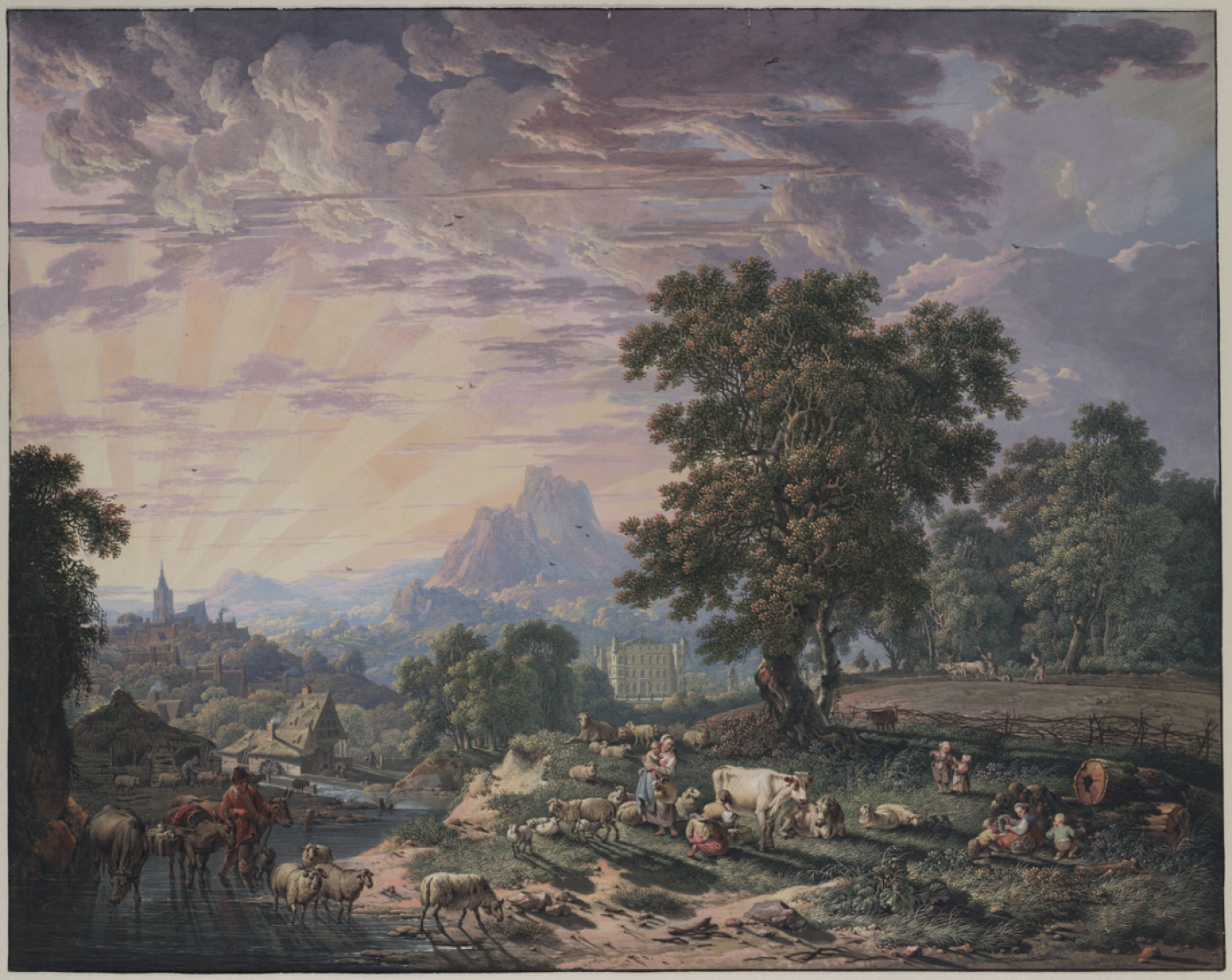 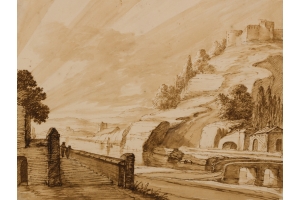 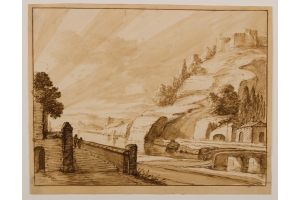 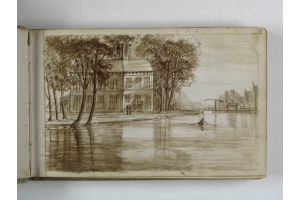 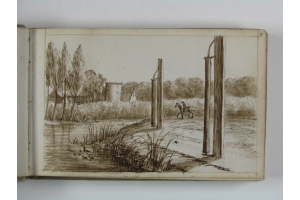 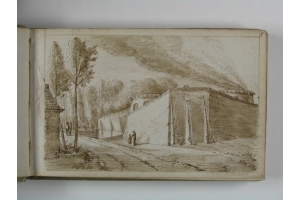 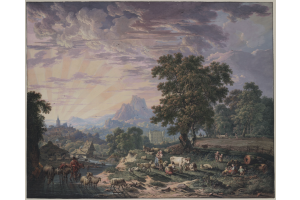 Abraham Rutgers was born as the youngest son of David Rutgers and Susanna Flines in 1632. In 1659 he married the ten year younger Anna van Hoeck who died in 1674 during childbirth.[1] Abraham, a slik merchant by profession, was an amateur draughtsman or dilettante and close friend of Jacob Esselens. He was self-taught and later may have been educated by his friend and fellow merchant Esselens and influenced by Rembrandt van Rijn which declares why drawings by Rutgers sometimes are confused with Johannes Leupenius and Philips Koninck. Rutgers had the custody of Esselens's children after his death in 1687 which shows the intimate friendship between both artists.

Characteristic for Rutger's drawings are strong diagonal compositional elements creating a powerful and deep vanishing perspective which is clearly visible in our drawing. This strong diagonal perspective is evident for many drawings by Rutgers, though the present drawing shows extra perspective strength due to the linear sun beams radiating from the center left into the mountainous lanscape creating an additional reinforcing compositional element in this unusual sunlit drawing. The slightly clumsy figures are characteristic for Rutgers and show great similarity with the figures in the drawings from the collection Jacobus A. Klaver.[2] The same kind of spectacular sky with broad rays of sunlight visible in the almost a century later dated drawing by Hendrik Meijer (Amsterdam, 1744-London, 1793), present in the collection Teylers Museum Haarlem.[3](image 6)

Our drawing titled verso "De Rommelpott van Hoorn" might well be a Principale as the landscape is very similar to the nature found in Horn-Bad-Meinberg, the german location meant by "Hoorn". In Germany there wasn't such a place called Hoorn such as the Dutch town of Hoorn and the mountainous landscape clearly being non Dutch. The name "De Rommelpott" is typically the name of an Inn which also claims the drawing to be a principale, although this remains unsure as travels to Germany by Rutgers are unrecorded and most of his drawings depict locations in the vicinity of Utrecht and the river Vecht where he most probably owned a country seat in Nieuw-Maarsseveen together with his elder brother Philips. Also many familly members of his wife Anna lived nearby the river Vecht, thus providing multiple locations for drawing activities.[1] It is also known that Rutgers made drawings of Kleef, which were copies after other artists like Jacob Esselens and Lambert Doomer.[5]

Our drawing must be dated between 1680-1690 (watermark Coat of arms of Amsterdam, ca. 1680-1690) and closely matches with the drawings in the collection of Museum Mr. Simon van Gijn, Dordrecht.[7] The Rommelpott drawing is slightly larger and more square compared to the rectangular van Gijn drawings which all have borders measuring 105 x 170 mm.

The authorship of Abraham Rutgers has been kindly confirmed by Erik Löffler, RKD, The Hague and a digital image of our drawing has been added to the online RKD database as well.[8]