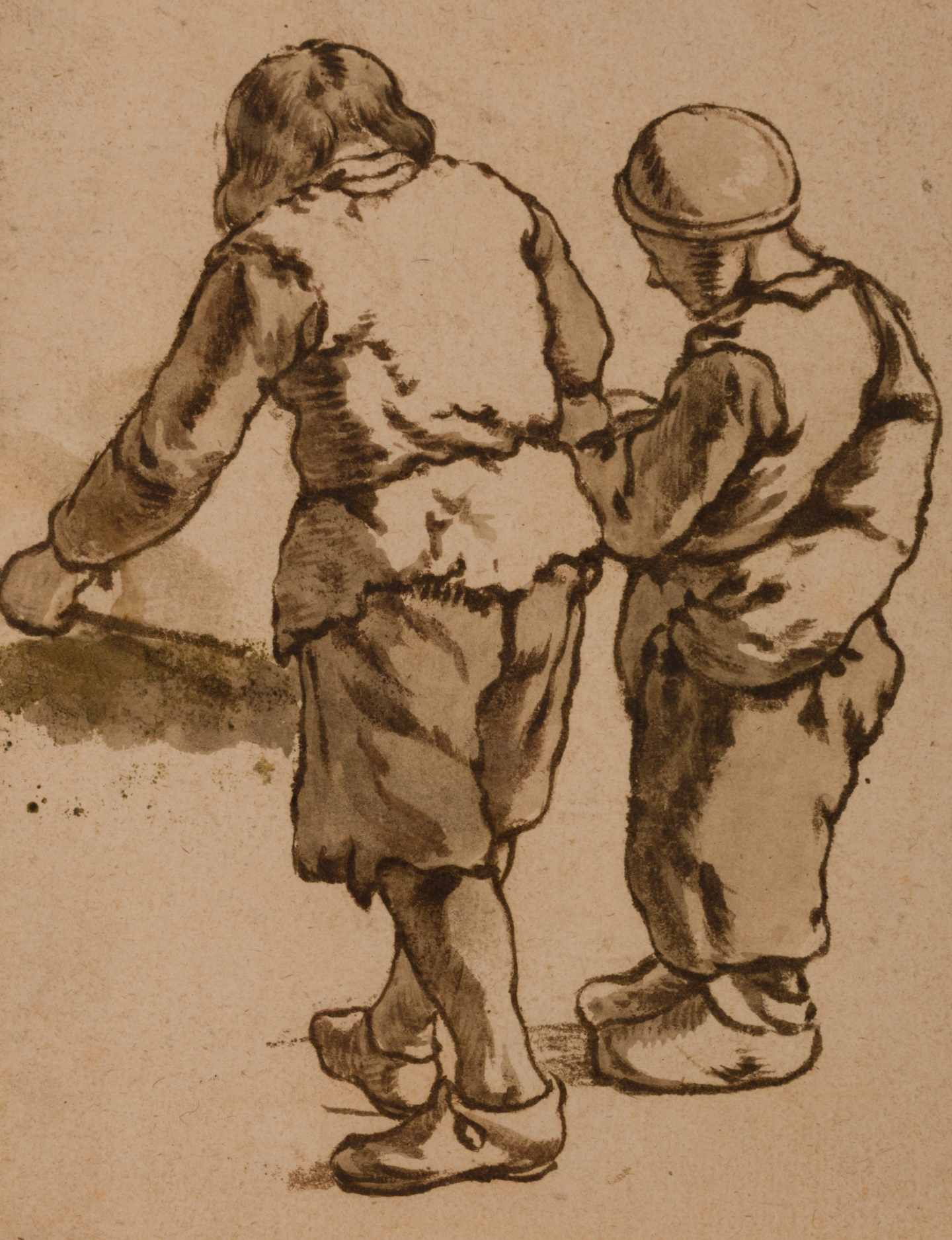 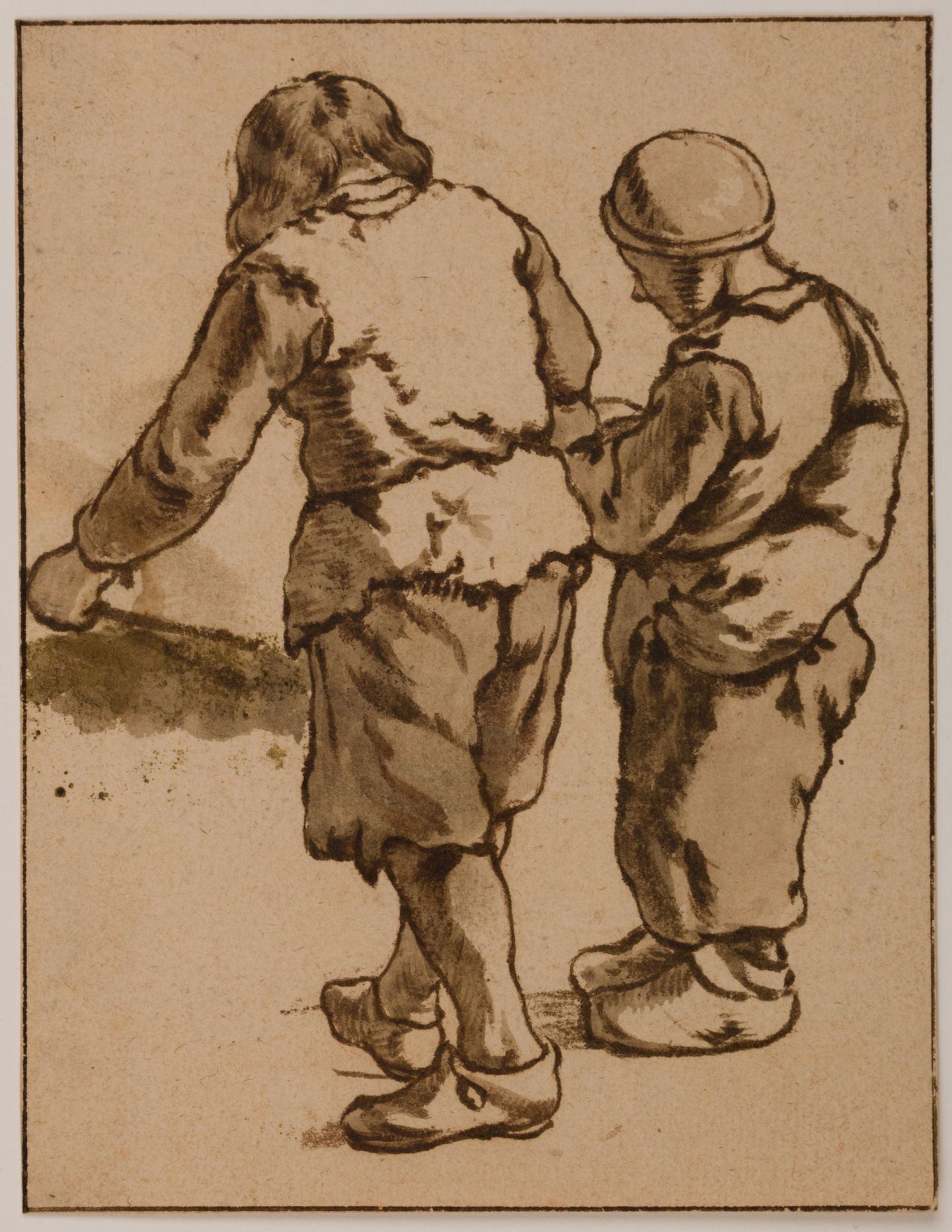 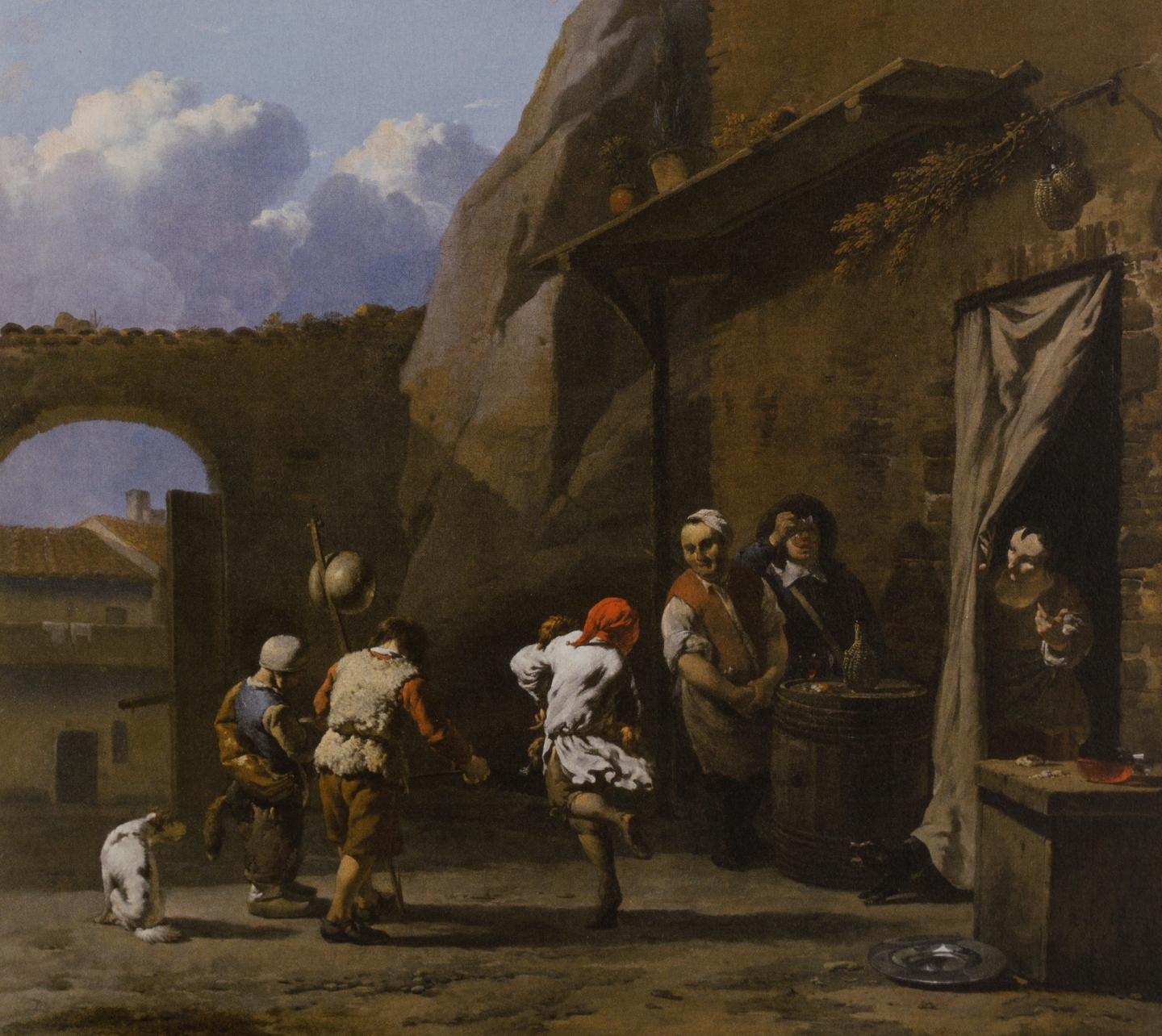 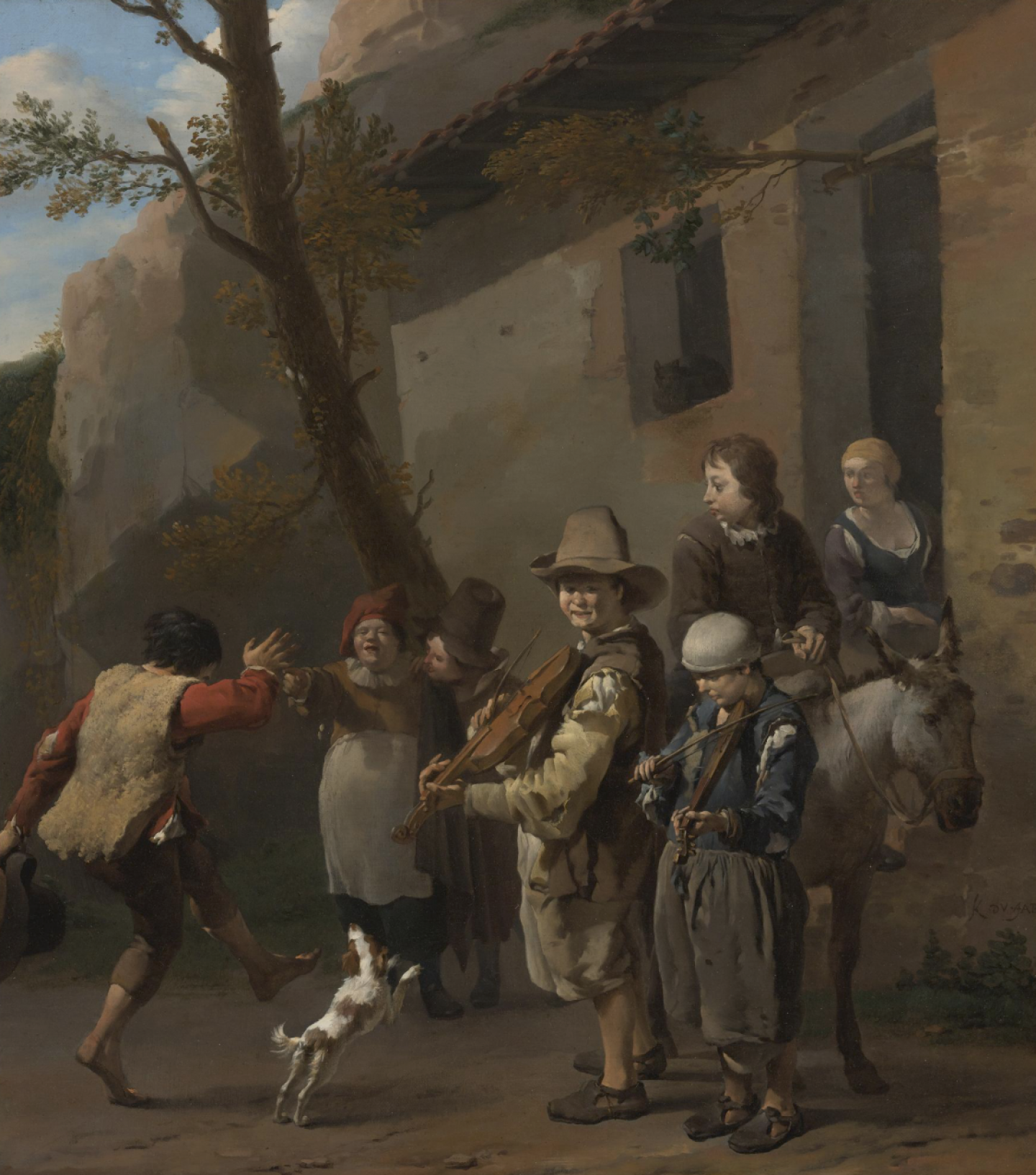 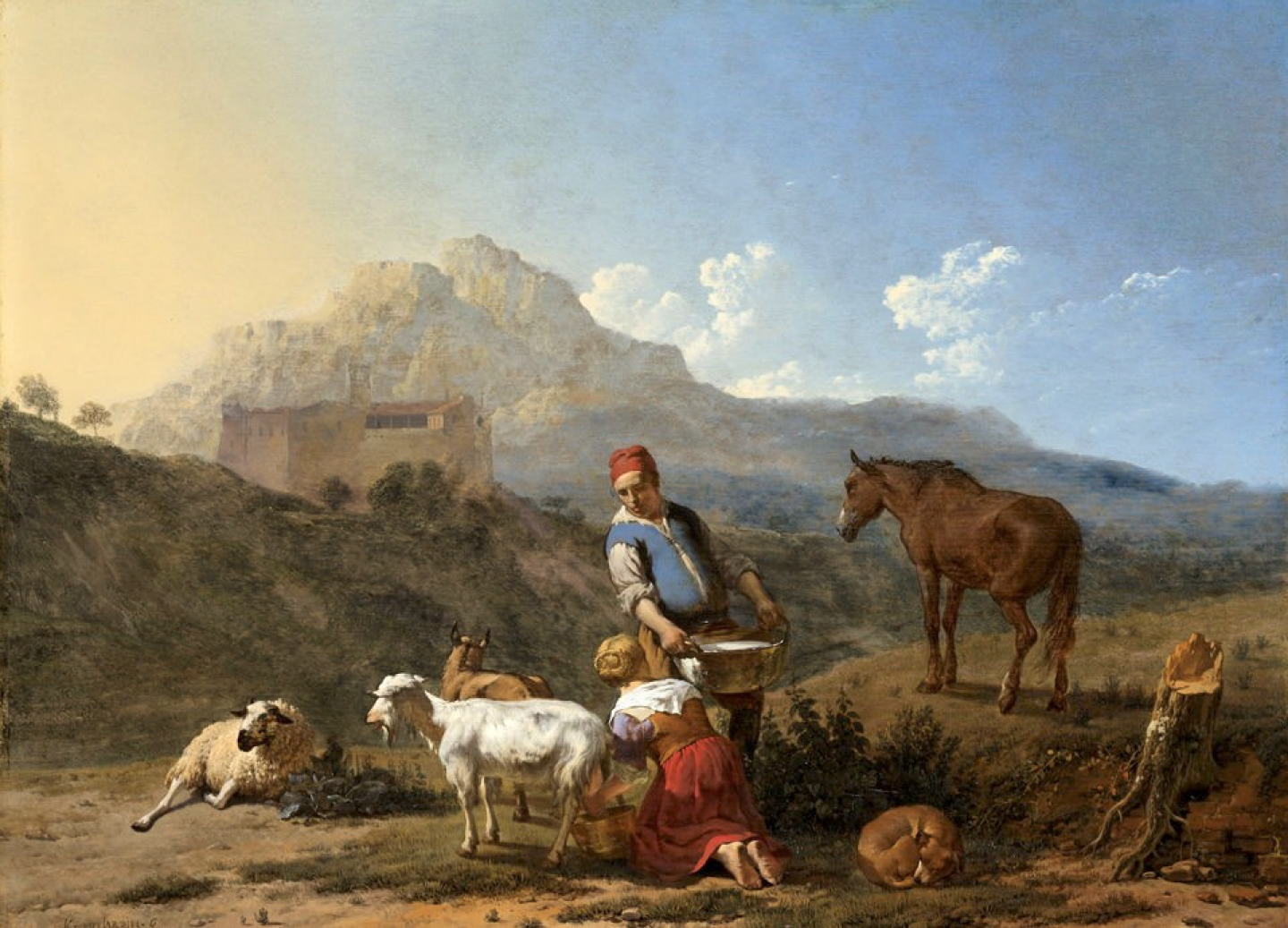 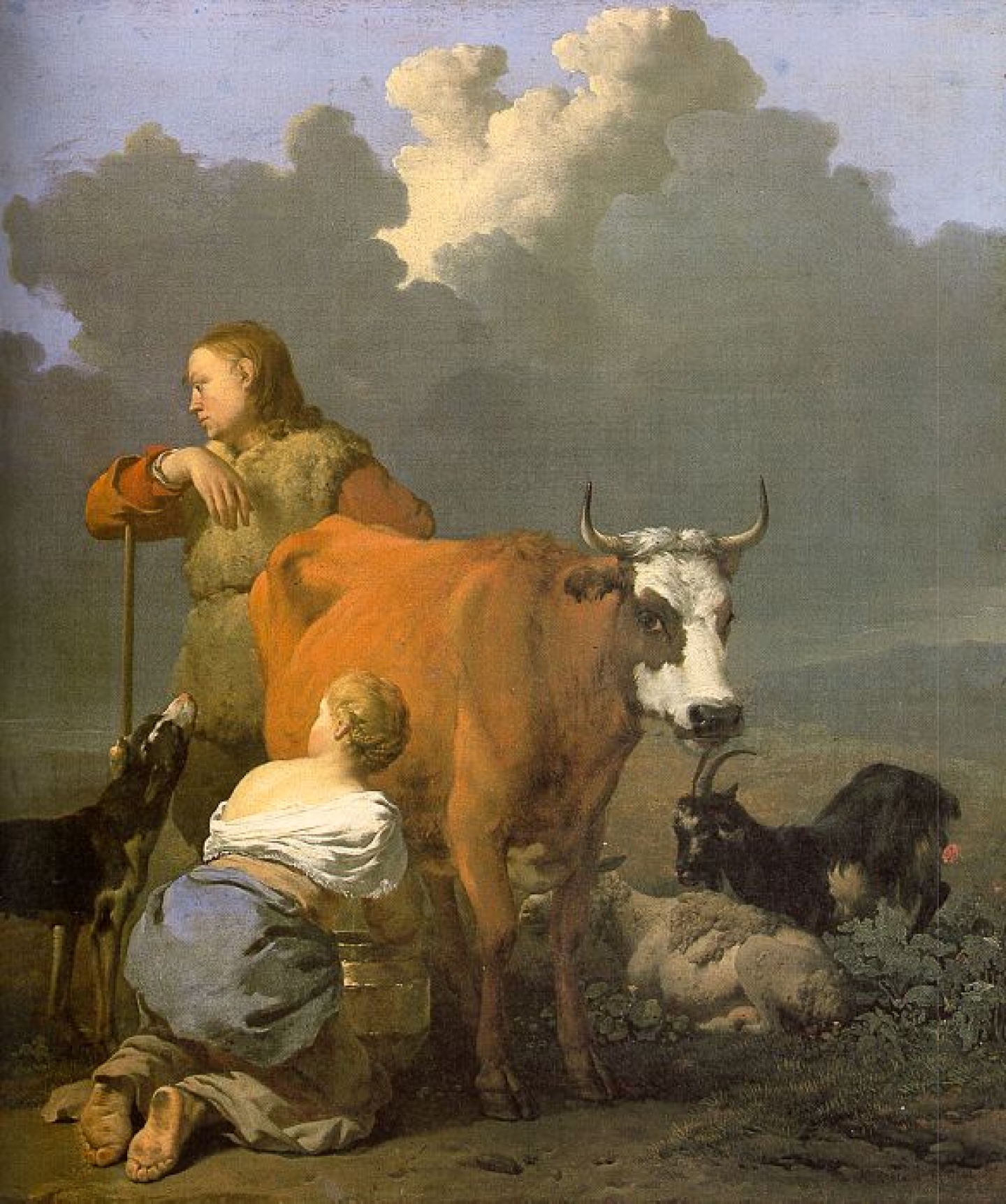 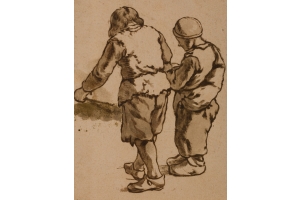 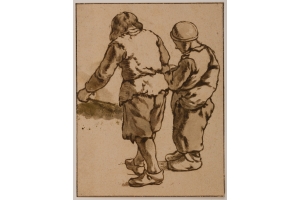 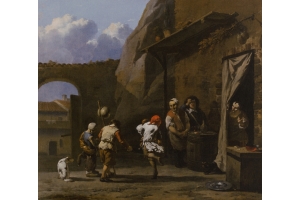 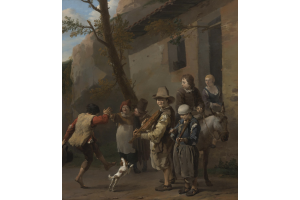 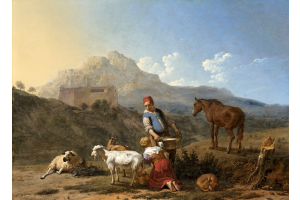 Born as the youngest son of the fat renderer Charles de Jardin / Gardyn (Middelburg, ca. 1599 - Amsterdam, died before 1650) and Catalyn Borchout (Antwerp, 1588 - Amsterdam, died before 1650) Karel Dujardin developed into a multitalented painter most famous for his sun-drenched italianate landscapes who also painted history pieces and portraits mainly of patricians. His most famous being the portrait of Admiral Michiel Adriaensz. de Ruyter who he painted in 1669.[1] Besides all of this, Dujardin also was a gifted draughtsman and etcher.

The initial contact between the humble origins of Dujardin and the Amsterdam Elite probably established by Joan Le Gouche, a far relative of Karel's mother.[2] Shortly before 1649 on his way to Italy most probably to complete his artistic training he travelled via Lyon where he was unable to pay his bills at the Inn of Suzanne van Royen who forced him to marry her in cancellation of his debt. Karel lived shortly in The Hague between 1656 and 1659 where he was a founding member of the confraterny Pictura, after which he returns to Amsterdam again. Here he painted amongst others the splendid portraits of Jacob de Graeff and Joan Reynst, Karel's friend, neighbour and landlord. In 1675 Karel left for Italy were he joined the "Bentveughels" and was given the nickname "Bokkebaert" (Goatsbeard). In 1678 he travelled to Venice where he most likely died from food poisoning. A few days later Suzanne died, unaware of her husband's earlier death.

Karel is thought to have studied with Nicolaes Berchem because of the similarities between their italianate landscapes. Dujardin's (imaginary) landscapes are characteristic sun-drenched views of Rome and it's vicinity with shepherds, peasants and travellers under clear blue skies and harbours with traders. Karel has also been suggested to have studied with "Bamboccio" Pieter van Laer and was influenced by Paulus Potter and his second cousin Pieter Nason.[2] Dujardin became one of the best paid painters of 17th century Amsterdam.

The present workshop monotype of two boys in an italianate landscape making music before an Inn is of greatest rarity as monotypes by Dujardin are extremely scarce. The taller boy is playing an ancient string instrument whilst the younger boy plays a hurdy gurdy.

This workshop monotype in oil paint on handlaid paper, finished with brush and wash, was taken from the dead-colour underdrawing in oil paint from the painting which was sold by dealer Bob Haboldt in 2007 (image no. 3).[3][4] This painting possibly listed as no. D222 in the catalogue raisonné by Jennifer M. Kilian.[5]

Perfectly visible in the X-ray image by Dr. Frans Laurentius are the pasty outlines of the two boys, caused by the sticky oil paint from the underdrawing of the iron rich dead-paint or dead-colour when the paper was laid over the wet underdrawing in oil after which the monotype was taken (image no. 2).[6]

Dead-colour oil paint is typically extremely rich of iron, which blocks the X-rays causing the black outlines on the X-ray image. The terminology dead-painting possibly originates from the shape of the kettle in which the pigments were prepared from iron ore or iron stone, this kettle resembled a dead head. It may also derive from the terminology caput-mortuum which was the chemical name used by alchemists. The PhD thesis by Dr. Nico van Hout gives a detailed and in depth insight into the use of dead-colouring and it's functions.[4]

The present workshop monotype process certainly not to be confused with reproductive techniques such as abklatsch or the procedures described by Joseph Meder.[7] For example; if the present workshop monotype would be a reproductive abklatsch of the mature varnished painting, we would see the elder boy together with the ancient string instrument he's playing in the painting as it would be most illogical to depict only the bow and not the instrument itself. When Dujardin made this workshop monotype he was probably still thinking of the instrument he would choose for the elder boy to play. There's also progress visible in the underdrawing; for example the cap of the little boy, which is rounder in the workshop monotype and has become slightly flattened in the painting.

The date of the countermark "DC" in the paper (ca. 1653) chronologically perfect matches with the signed and dated painting which is dated 1659. This all fits well between the years 1652 and 1659, when Dujardin made the vast majority of his 52 etchings; the present workshop monotype being a graphic artist's experiment to see how the underdrawing for a painting would look in reverse image.[2] These workshop monotypes aren't free graphics but workshop processes and a painter's studio accessories which clarifies their rarity.

Clear evidence for this thesis we find in the correlation between the paintings "Italian landscape with girl milking a goat" and "Cattle in a meadow, with a shepherd and a shepherdess milking a reddish brown cow" where Dujardin painted the same milkmaid in mirror image (images no. 5 and 6).[8][9]

The two travelling musicians apparantly were favourite figures of Dujardin as they both together also figure in a slightly varying composition in one of the main paintings by Dujardin, listed under no. 96 in the catalogue raisonné by Kilian sold in the rooms of Sotheby's, New York in 2008 (image no. 4).[10][11] In this painting the elder boy is dancing whilst the younger boy plays the lute.

[9] Karel Dujardin, Cattle in a meadow, with a shepherd and a shepherdess milking a reddish brown cow. Oil on canvas, 66 x 59 cm. Nationalmuseum Stockholm.