Reinier Vinkeles (Amsterdam 1741-1816 Amsterdam) Jacob Haafner conversing with the 'Jammedaar' in Alamparvé, Ceylon, Jacob Haafner with Anna and the two girls land on the island Caradiva. 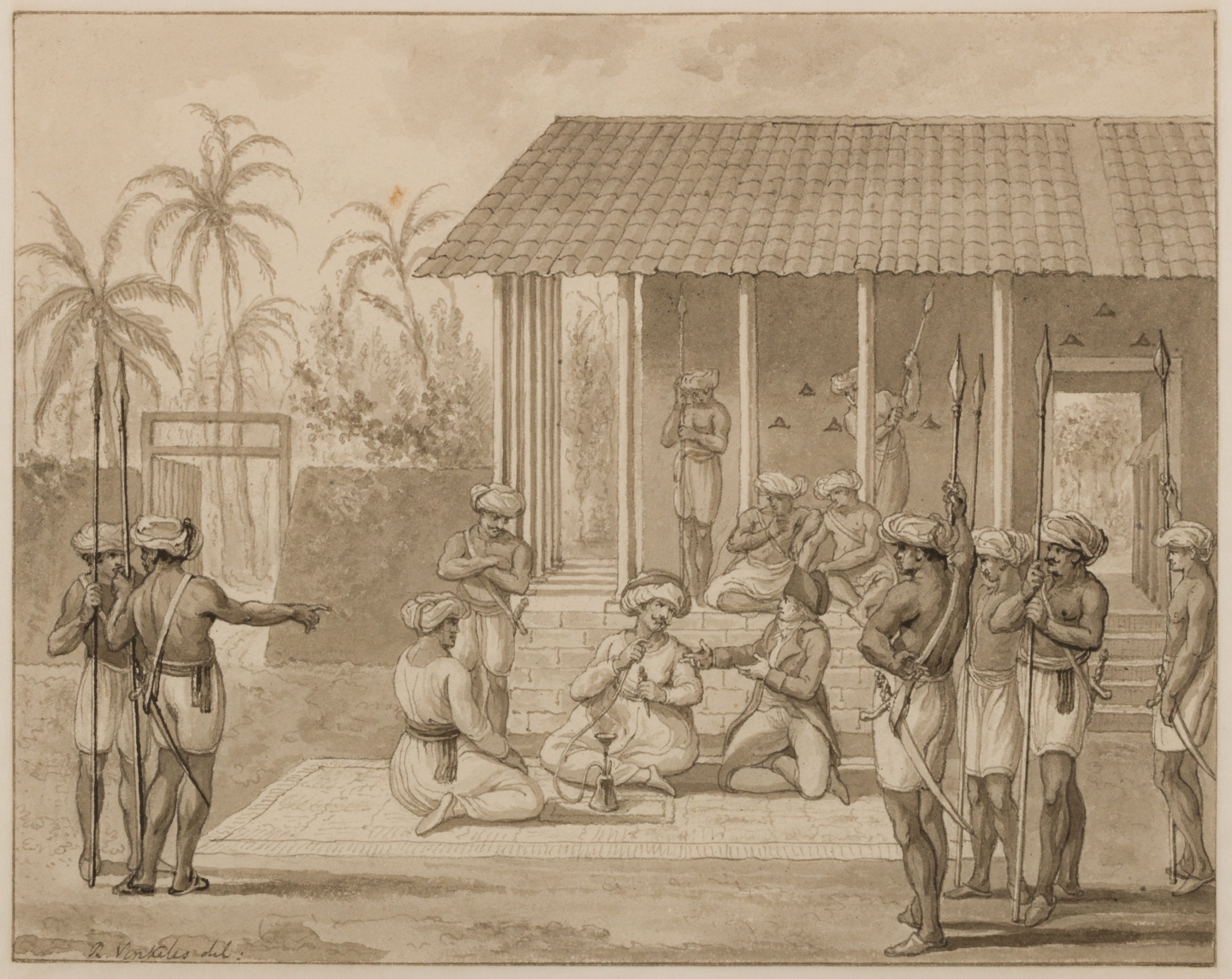 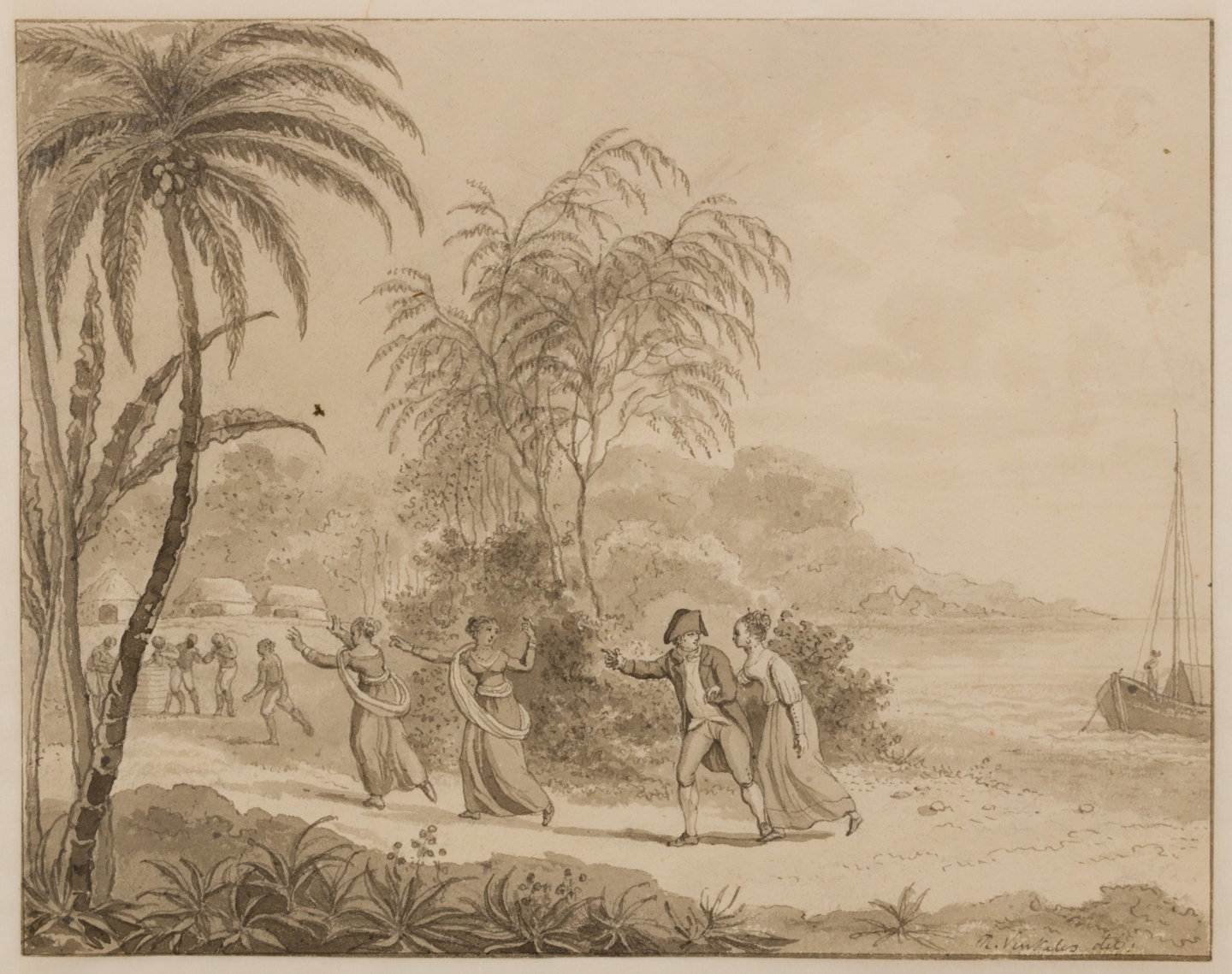 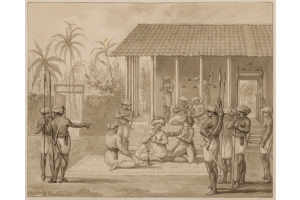 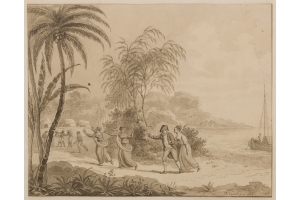 Following the family line, Reinier Vinkeles was originally intended to become a tradesman, though at the age of only eleven years old his remarkable talent regarding drawing was recoqnised by a fellow student which resulted to an apprenticeship with Jan Punt (Amsterdam, 1711-1779) where the gifted youngster was trained to become an engraver. Reinier became the assistant to Punt for over a decade. Besides this, he was active at the Amsterdamsche Teeken-Akademie (Amsterdam Drawing Academy) as a board member as well. He also was an apprentice to J.P. Le Bas in Paris, by whom he was taught the technique of dry needle etching. Reinier left an oeuvre of over 2500 prints, who served mainly as book illustrations.[1]

Much appreciated drawings by Vinkeles are his pendant versions of the Amsterdam City Theatre, of which a set is present in the John and Marine van Vlissingen Art Foundation.[2]

The present set of drawings are the original drawings to the engraved plates "Onderhoud met den Jammedaar te Alamparvé" (conversing with the 'Jammedaar' in Alamparvé) and the title-vignette both to J. Haafner, "Lotgevallen op eene reize van Madras over Tranquebaar, naar het eiland Ceilon" (Adventures during a travel from Madras through Tranquebar to the island of Ceylon). A. Pz. Loosjes, Haarlem, 1806.[3]

Jacob Haafner (1754-1809) lived for many years in India and knew the language well, which is quite exceptional for a European. He was notorious for being a womanizer, a passionate traveller, a compelling narrator and a sharp critic of colonial exploits. Haafner, who was a multicultural avant la lettre, wrote five travel stories, all taking place in India and Ceylon.

Haafner had been introduced to Vinkeles by the merchant J. Hilkes and got an apprenticeship at Vinkeles' workshop for some time.

His first travel took place at the age of eleven years old, together with his father (who was a ship's doctor) on a VOC-ship to Asia. Jacob became an orphan and was stranded in Cape Town, as his father died during the trip to Batavia. In 1770 he returned to Amsterdam, but didn't feel at home and in 1771 left with the VOC for India untill 1786, where he lived in Negapatnam, Sadras, Madras and Calcutta. Here he made a living out of bookkeeping and as a tradesman.

He fleed to Ceylon when the English invaded Sadras in 1781 which made him write "Lotgevallen op eene reize van Madras over Tranquebaar, naar het eiland Ceilon". After some unfortunate relationships he went back to India, to Madras and Calcutta, where he worked as a bookeeper. From 1787 utill his death in 1809 he lived in Amsterdam again. To make a living after he lost his capital which he invested in shares he became a translator and eventually decided to write down his autobiographical travel stories from the period 1766-1787 which became most popular and for which he was highly appraised by Multatuli.

Jacob had passionate affairs with the "Hottentot girl with beautiful round boobs", the Indian dancer Mamia and the "mestiezenmeisje" (mestizo girl) Anna, with whom he spent the most sensational hours of his life. Reize in eenen Palanquin, 1808, is regarded as Haafner's Magnum Opus. The two books "Lotgevallen en vroegere zeereizen" (1820) and "Reize naar Bengalen en terugreize naar Europa" (1822) were issued posthumous by his son.

The first drawing, shows Jacob visiting the "jammedaar" (the local name for a position comparable to what Europeans call a captain) in Alamparvé, Ceylon. In fact, this was not just a voluntary visit, as he was summoned by the jammedaar's soldiers to visit him, right after Haafner set foot on Ceylon. Haafner pretended to be a French ambassador, untill the jammadaar found out he was a true hero. On the second drawing, we see Jacob together with Anna, who have just landed on the island of Caradiva with locals escorting them to a water well. This drawing is the original design for the frontispice to Haafner's "Lotgevallen op eene reize van Madras over Tranquebaar, naar het eiland Ceilon". Both drawings are the preparatory designs for the only two illustrations to the book.

Haafner was one of the first europeans to revolt against colonialism. He was a fierce opponent of Christianity and colonialism, which he regarded as a sequence of robbery, exploitation, slavery, rape and murder. A quote by Haafner leaves no doubt about his opinion; "The discovery of India by the Europeans is the biggest disaster this country has been able to face".[4][5]

Exotic and colonial drawings by Vinkeles are exceedinlgy rare to appear on the market, the latest one being offered on the market in 2002.[6]