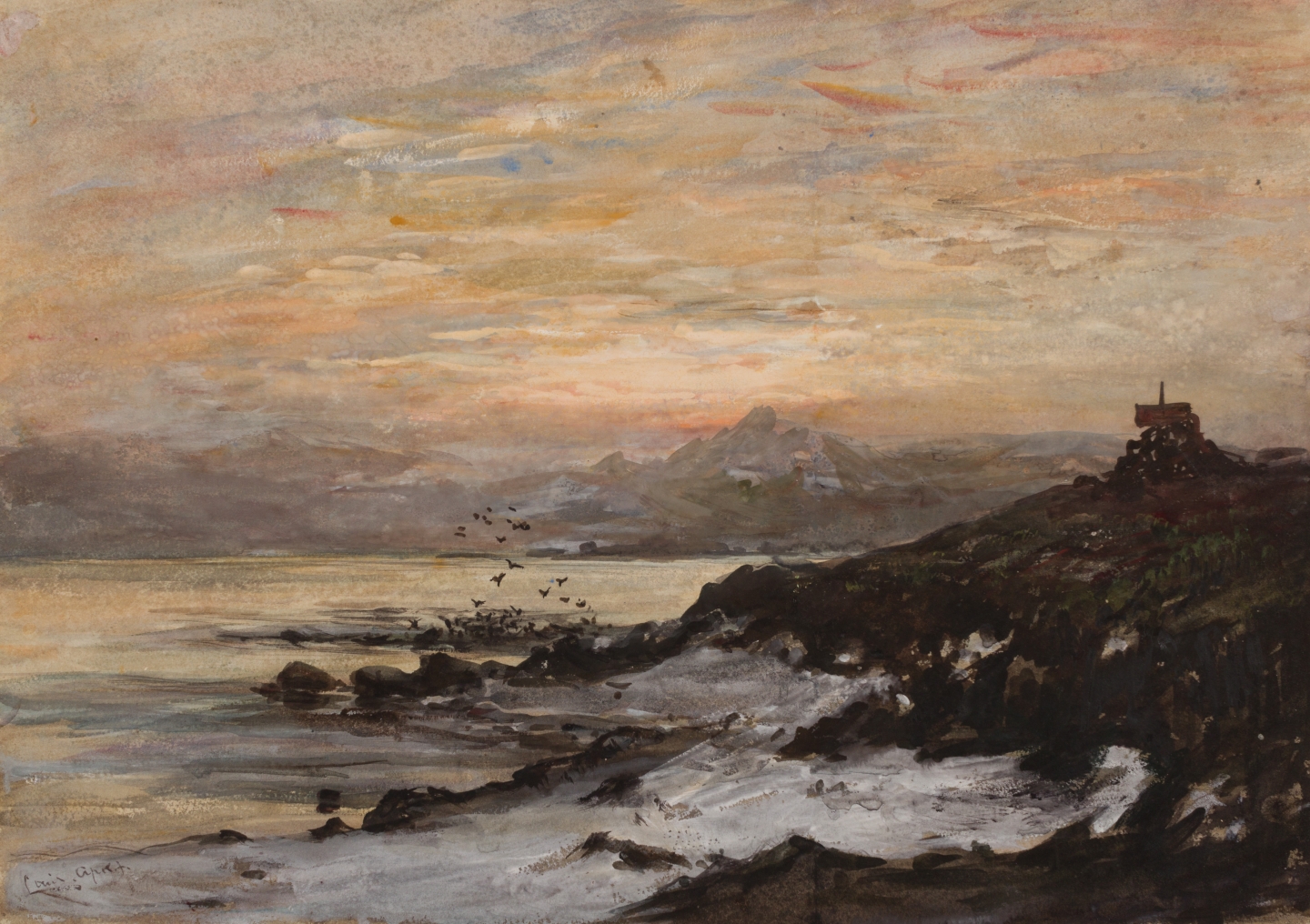 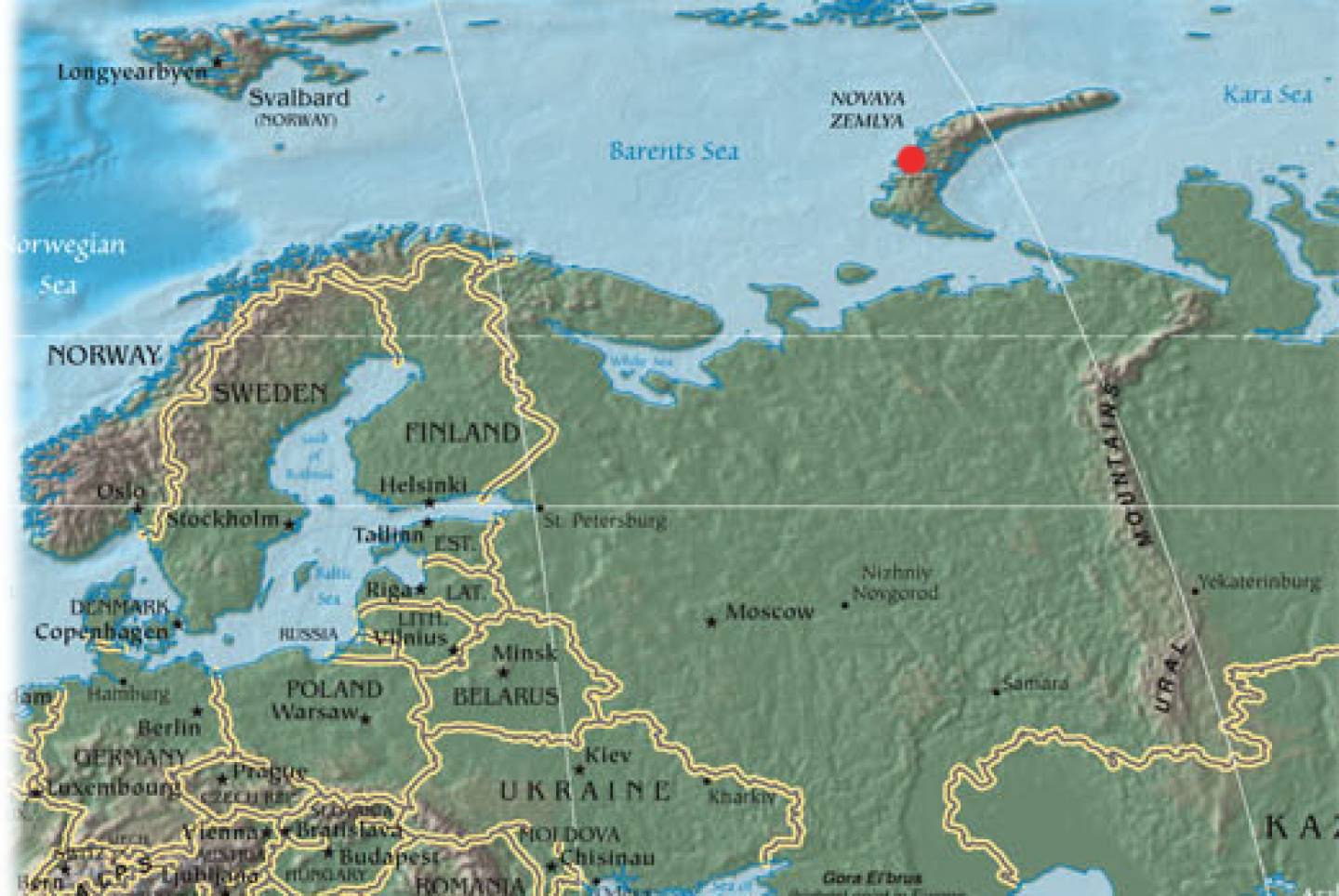 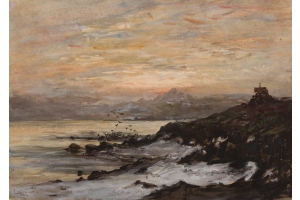 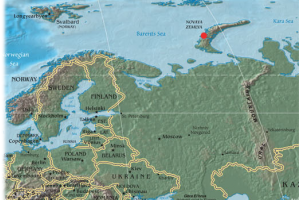 Born in The Hague on 6 september 1850, Lodewijk Franciscus Hendrik "Louis" Apol became a pupil of J.F. Hoppenbrouwers (The Hague, 1819-1866) and P. Stortenbeker (The Hague, 1828-1898). He had his first exhibition in 1869 and was awarded three years later with a gold medal. The painting "Aan de rivier" (At the river) he exposed at "Arti et Amicitiae" was part of the Dutch exhibition for the World Fair Philadelphia in 1876 as well where it was praised. Already at young age he would become a famous winterlandscapist.

In 1877 a committee was founded to commemorate the area's in Nova Zembla and Spitsbergen which had been discovered in the past by Willem Barentsz. (Formerum, c. 1550- deceased at sea, 1587). Scientific and biological research were part of the missions as well. On the first two travels of the poolschoener (polar schooner) "Willem Barentsz." in 1878 and 1879 the english photographer W.J.A. Grant boarded the ship to take pictures of the trip in order to promote the missions of the Willem Barentsz. to raise funds after returning for following trips. After the second trip Grant went for an english expedition to Frans-Josefland and therefore was not available anymore. Prior to the second trip, Apol already applied for the Willem Barentsz. but was rejected cause of Grant. This time he applied successfully and accompanied the third trip to make drawings during the travel. They embarked at Ijmuiden on 3 june 1880 and visited the "Mollerbaai" in the south of Nova Zembla in june to visit a Samoyed-settlement and a russian rescue station for polar travellers.[1] It is here at Nova Zembla where he hade this splendid mesmerizing view of the "Midsummer Night".

The phenomenon "midsummer night" takes place around the 21th of june each year on the north pole, as the earth rotates around the sun at an angle of 23,4 length degrees. This causes the area's above 66 degrees north latitude including the north pole to be exposed to sunlight for over 24 hours on end without the onset of darkness and fall of night.

On 9 august the ship stranded on a riff in the northern part of Nova Zembla and became damaged. They returned on 9 september 1880 at Ijmuiden again and Apol brought several hundreds of sketches, drawings and a few paintings with him back to The Netherlands.

The first Panorama painting in The Netherlands was painted in Amsterdam, 1803 and in 1878 the "Panorama Maatschappij Amsterdam" (Panorama Society Amsterdam) was founded with P. Tétar van Elven as initiator. A rotunda building was built at the Plantage Middenlaan with in succession panorama's of Pompeji, Mesdag and Jerusalem.

Louis Apol's Panorama Nova-Zembla was painted 16 years after he returned from Nova-Zembla, assisted by H.O. van Tol, H. Kleijn and W.J. Oppenoorth. The exhibition opened at 30 july 1896 and lasted till 1901. The original canvasses were destroyed by fire in Haarlem during WWII. The most famous and only panorama remaining nowadays is Panorama Mesdag.

This large gouache shows a midsummer night which Apol made during his Nova Zembla voyage in 1880 on the "Willem Barentz". Verso a large sketched pencil drawing by Apol depicting a signtower with a moored boat at the North Pole.