Jacob de Wit (Amsterdam, 1695-1754) Allegory of spring and summer and allegory of the five senses (Two designs for the countryhouse of Jan Hüdde Dedel (Amsterdam, 1702-The Hague, 1777), mayor of The Hague) 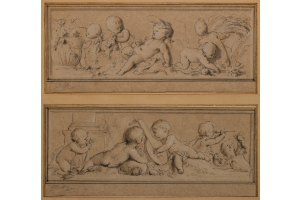 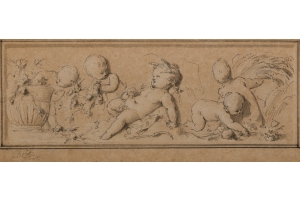 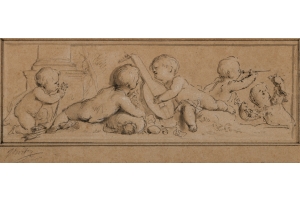 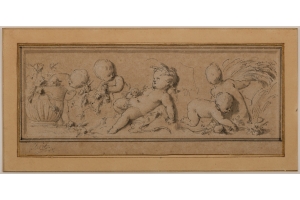 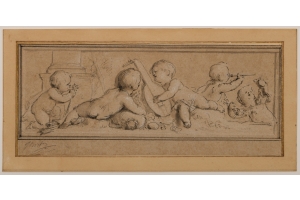 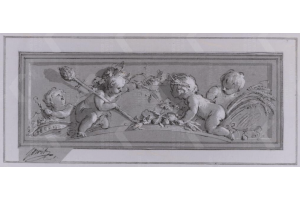 Jacob de Wit was the son of Christiaan de Wit and Annetje Slootmans and born in the lower middle class of Amsterdam. At the age of nine Jacob became a pupil to Albert van Spiers who in his turn had been a pupil to Gerard de Lairesse. About 1708 Jacob went to live for several years with his uncle and godfather Jacob (who called himself Jacomo) in Antwerp, which has been of crucial importance for his artistic development. Here he met Jacob van Hal and was introduced to the works of Rubens and van Dyck. The designs Rubens had made for the Jesuits church Antwerp, which de Wit copied during 1711-1722 in red chalks are amongst his earliest examples of ceiling designs. The figures seen from below, so-called "di sotto in su". He copied his own set several times and the drawings were engraved by Jan Punt.

Strongly influenced by the seventeenth century painters Peter Paul Rubens, Gerard de Lairesse and Anthony van Dyck, Jacob de Wit became one of the foremost painters of the Dutch eighteenth century. He is most remembered for his Over-door (supraportes), over-mantle and ceiling paintings in the houses of rich patricians and merchants in Amsterdam (Herengracht and Keizersgracht) and their countryhouses of which our set of drawings are exceptional examples.

Jacob himself owned two houses in the Keizersgracht, number 383 and 385. The base for these traditions originates from the era of Stad-holder King William III. The name "Witjes" (grisaille imitations of reliefs) named after the typical bas-relief drawings and paintings for which de Wit became renowned. De Wit was trained at the Academy in Antwerp and returned to Holland between 1715 and 1717 and specialised in mythological and allegorical subjects. De Wit had no real pupils and the only two artists mentioned as having been taught some basics by him are Johannes de Groot and Gerrit Dadelbeek. He married Cornelia Leonora van Neck in 1720 and the couple remained childless.

Jan Hüdde Dedel (Amsterdam, 1702-The Hague 1777) was the mayor of The Hague for twelve tenures between 1735 and 1777 and bought countryhouse "Outshoorn" in 1735 for 11.000 guilders. In 1767 he also bought the adjacent countryhouse "Steenvoorde". After his death in 1777 both countryhouses were bought by Jacob van Vredenburch, who also acquired "Overvoorde" from the heritage of Jacob van der Dussen and Catharine van Vredenburgh (21 July 1777).

These two designs for the countryhouse "Outshoorn" , allegories on spring, summer and the five senses, are of great historical importance as they are the only remaining documentation of the interior designs by Jacob de Wit as the original paintings have been lost in the past.[5]

Both drawings were part of the private-collection of Cornelis Ploos van Amstel (Amsterdam, 1726-1798), one of the foremost collectors and connoisseurs of The Netherlands in the eighteenth century, who owned many drawings by his comtemporary Jacob de Wit. In his auction sale by van der Schley, 1800 were even several albums comprising drawings exclusively by Jacob de Wit, of which our two drawings once were part of Kunstboek NN.

Comparable designs by Jacob de Wit are preserved in the collections of the Rijksmuseum, Teylersmuseum and the collection of the Prentenkabinet Leyden.[6][7][8](image 6)

SOLD:
Sold to the City Archives of The Hague