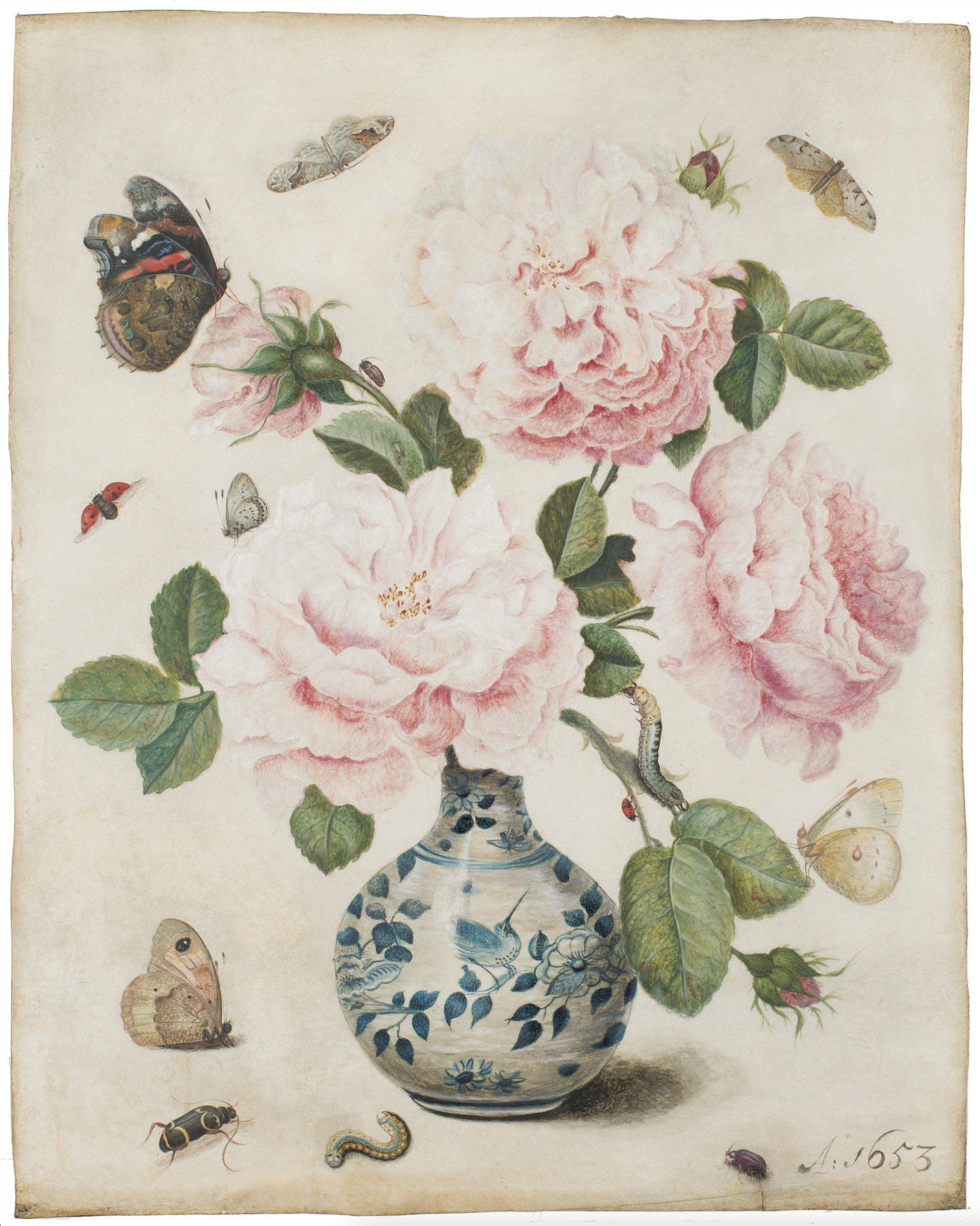 Son to Wybrand Symonsz. de Geest (1592-1661) and Hendrickien Fransdr. Uylenburgh (1600-1682), François or Franciscus de Geest was born in a family of (glass)painters. His father who was trained by Abraham Bloemaert (1564-1661) was a famous portrait painter in Friesland with commissions to the Nassau-Dietz family and Frisian nobility. François' date of birth is quite unsure, but he must have been born after 1626 and before 1638/39. His date of death is also speculative and 4 April 1682 has been suggested, though this remains unsure as well.

The repertoire of François is completely different from that of his (grand)father and brother, as he dedicated himself exclusively to painting flowers and insects instead of portraits. Evident is, Franciscus lived in Leeuwarden in 1670 and must have known the work by his fellow-citizen Margareta de Heer (1600-1665). Only one with monogram "F.d.G." signed and "1653" dated drawing by Franciscus de Geest is known, preserved in the collection Fries Museum Leeuwarden. This drawing is believed to be his earliest known work, which bears the same date as our drawing. It has been suggested, due to the small known oeuvre of de Geest, that François combined painting and drawing with another profession alike art dealer or inn-keeper or he was a dilettante like Margareta de Heer.[1]

The drawing in the Fries Museum is clearly based on known and autograph drawings by the dilettante artist Margareta de Heer who was active between 1636 and 1658. The beetle by de Geest is present in Margareta's signed and dated drawing "Rozen en insecten" (roses and insects), in the coll. Amsterdamsch Historisch Museum, Amsterdam and the butterfly is literally copied after Margareta de Heer. The Atalanta (Vanessa Atalanta) butterfly returns in several autograph drawings by Margareta as well.[2][3][4][5][6]

In the present drawing by de Geest, the source of light is concentrated in the upper left, casting shadows on the lower right plan of our drawing. This is also a clear excample of influence by Margareta de Heer as nearly all of her still lifes have this left-right direction of light and shadow.

Later on in 1668, Franciscus made drawings for two Florilegia, the earliest drawings to the books dated 1658. On the title-page of the book his brother-in-law Adam Pijnacker (1622-1673) mentions François as the artist responsible for the flower drawings. One Florilegium preserved at the Bibliotace Nazionale, Rome and the second at the Oak Springs Garden Library, Upperville (USA). Both books depicting numerous species of plants, as well exotic as cultivated species and wild flowers and foliage. By far the largest part dedicated to tulips. Franciscus drew the flowers from three gardens in Leeuwarden and surroundings, which were owned by Petrus Nijs (1617-1660), Theodorus Saeckma (1610-1666) and "Sir. Coen uit Raerd".[7][8][9]

Clockwise, starting at half past one flies a Black-W-butterfly (Zwarte-W-vlinder/Macaria wauaria). Just a bit past four we see possibly a Curled or Banded Rose Sawfly larva (bladwesplarve/Tenthredinidae) having a snack and a Clouded Yellow (Gele luzernevlinder/Colias hyale) resting on a leaf. A few minutes later a tiny leaf beetle accompanies both while a hitherto undetermined beetle guards the ground troops. Slightly past six an also undetermined beetle larva seems to draw an unhappy face with on his left hand at seven o'clock a Small wasp buck (Kleine wespenboktor/Clytus arietis) while a Brown Sand Eye (Bruin zandoogje/Maniola jurtine) keeps an eye on both of the little rascals. When the evening falls at nine o'clock flies a Seven-dot Ladybug (Zevenstippelig lieveheersbeestje/Coccinella septempunctata) where a Icarus Blue (Icarusblauwtje/Polyommatus icarus) sits on a centifolia rosepetal. We enter the night at ten o'clock with the most prominent butterfly, an Atalanta (Atalanta/Vanessa atalanta) having a conversation with a small beetle on the flower stem and at eleven o'clock a Galium Carpet (Walstrobandspanner/Epirrhoe galiata) flies into the night, closing the day with it's gentle flight. For those who carry a magnifying glass with them, there's an Aphid (Bladluis/Aphidoidea) visible at one o'clock just below the bulb of the most upper centifolia rose.

The names of the butterflies, caterpillars and beetles have been kindly determined by drs. Peter Koomen, curator of Natuurmuseum Fryslân and chairman of the Dutch Entomological Society.

During 1983-85, four auctions of Christie's Amsterdam were devoted to the sale of c. 20.000 pieces of Chinese porcelain found in the remains of a sunken Chinese junk, now named the "Hatcher Wreck". This cargo had been discovered in the South China Sea by Michael Hatcher, owner of a salvage Company in Singapore. A first try-out in Amsterdam to sell these porcelains, including a covered jar dated to 1643, was followed by three more extensive auctions.

As all porcelains were found together, the cargo is dated 1640-43, based on the 1643 jar. This porcelain was mainly produced in Jingdezhen, the centre of the Chinese porcelain production in Jiangxi province, during the reign of the last Ming Emperor Chongzheng (1628-43). A few pieces in the cargo, f.i. mustard pots made after a Dutch earthenware model, and a pewter ewer, also of Dutch shape, that was used by the crew, indicated that the porcelain had been destined for one of the settlements of the Dutch East India Company (VOC) in Asia, either Taiwan or Batavia. Here was the entrepot for Asian commodities before they were sent to the Netherlands, or were used in the inter-Asian trade of the Company.

Since the time the VOC had started to sail to the East, Chinese porcelain had been one of the most rewarding items, creating a fashion in the Netherlands. First the wealthy, later middle-class people as well decorated their interiors with exotic porcelain and used it for dining and drinking. Initially, the customers had to accept what the VOC could buy, as the Company had no access to mainland China. After the settlement on Taiwan in 1624, however, things changed. Models of typically Western objects, made in wood or earthenware, were provided to Chinese middlemen who organised their reproduction in porcelain in Jingdezhen and their subsequent sale to the Dutch. Due to reorganisations in Jingdezhen the porcelain body of these wares was improved, while new decorative patterns were introduced. The name "Transitional ware" indicates this new type of porcelain, produced c. 1635-1645, transgressing from the old Ming to the later Qing porcelains.

Transition porcelain also included many typical Chinese shapes and decorations and was sold on the domestic market as well. Therefore Dutch collections, such as the Rijksmuseum Amsterdam, the Princessehof Museum in Leeuwarden and the Groninger Museum in Groningen, hold many Transitional wares in Chinese style with an old Dutch provenance; the latter two musea also have porcelain from the Hatcher Wreck. Interestingly, only few types of Transitional porcelain destined for the Netherlands are decorated with Western subjects. The exotic Chinese motifs sold much better, also on European shapes, and the directors of the VOC even ordained that "no Dutch flowers" should be ordered as part of the decoration.

Chinese flowers constitute a main motif on Transitional porcelain, either as bouquets or as single flower sprays. They show peonies, lotus, chrysanthemum, morning glory and other species, all with their specific Chinese symbolism and meaning.

The present vase from the Hatcher Wreck, now in the collection of the Groninger Museum, is 23,5 cm high. The size and the pear-shape are rather uncommon, but the decoration in underglaze cobalt blue with flowers is of the usual type. It is painted with an experienced hand and is well composed over the rounded surface. Due to the immersion in the sea for centuries, the glaze has become rather dull, but still protects the underlying decoration.

It is amazing to find a depiction of a closely related Transitional vase on the drawing attributed to Franciscus de Geest, proving that this porcelain circulated in the Netherlands shortly after its importation.

Last, but certainly not least a big and warm thanks to Marlies Stoter, curator Ancient Art at the Fries Museum, Leeuwarden for her help with cataloging this important drawing.