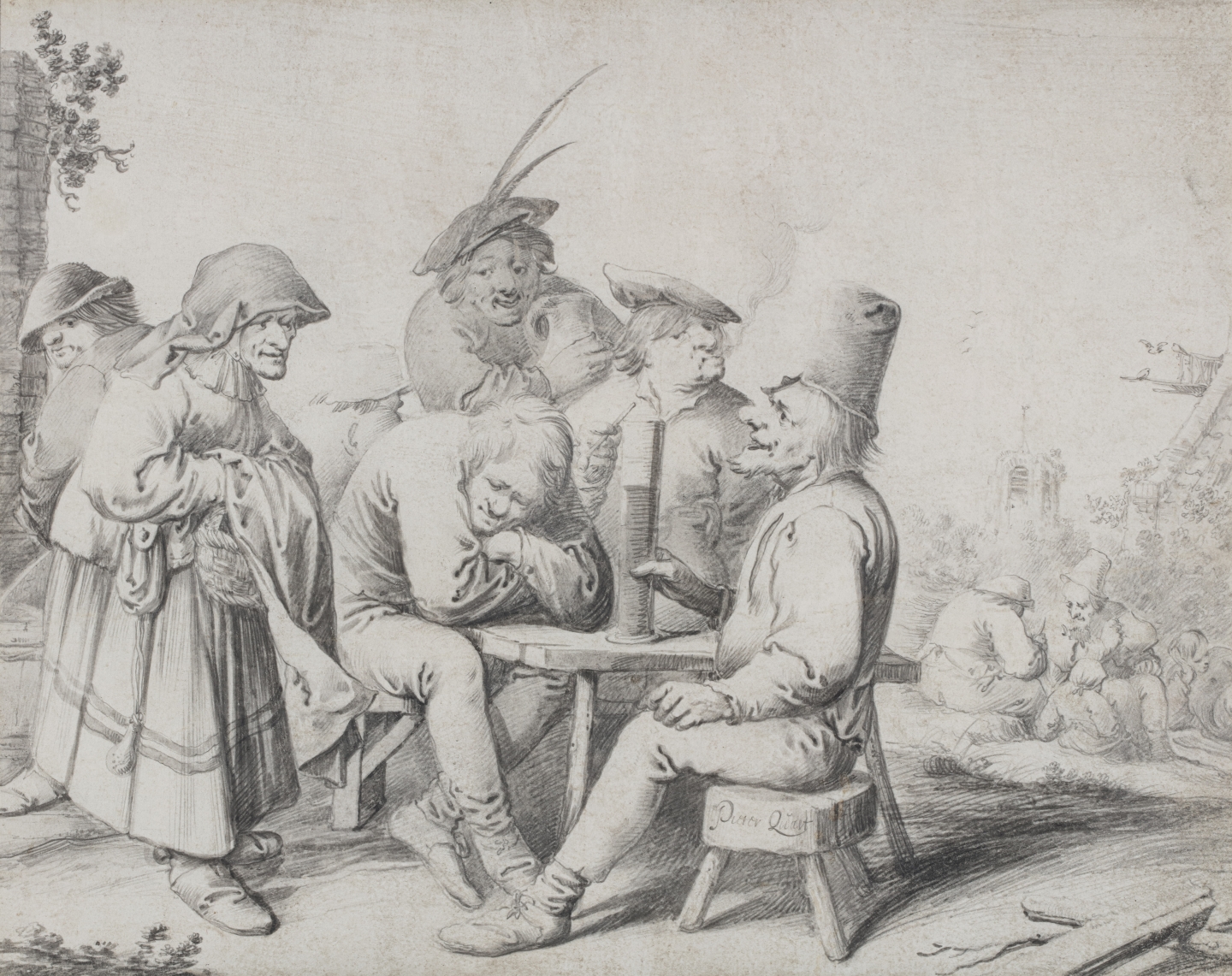 The present drawing shows a pyramidal shaped composition which appealed to Quast just like his choice of preference for comic theatre types. This sheet is of exceptionally large size within Quast's oeuvre and shows one of the buffoons similar to the one in the drawing preserved at the Museum Boijmans van Beuningen, Rotterdam. The seated figure on the far right on our drawing holding a pasglas (a large measuring glass filled with beer, used for drinking games) is the same as the one on the far right in the Boijmans drawing. These figures were directly inspired by Callot's Balli di Sfessania of 1621.[3]

The men seated around the table are occupied with the alluring aspects of life. Smoking, drinking (the seated figure on the far right holds a so-called "pasglas") and an old woman with a basket of eggs under a blanket symbolising female sexual seduction. The octagonal pasglas being the most common shape in the seventeenth century, the pasglas in our drawing is a round one, which seems to have been chosen carefully as will be declared later on.

Several other men are occupied with drinking and smoking, their characterfull facial expressions much indebted to the vibrant style of Adriaen Brouwer. The peasant exhaling his smoke while he holds his claypipe comes very close to Brouwer's "The smoker/Allegory on the Taste" in the Rijksmuseum, Amsterdam. A man who seems to have been drinking quite a load is taking a leak into a bucket on the far left. These low-life activities very much appealed to Brouwer and Quast.[4]

Pasglazen were used for games amongst men and each participant was deemed to drink his pas (=measurement) in one go. When failing, he had to drink the next pas as well, resulting in a swift stage of drunkenness, symbolized by the man on the left, who already has passed-out and snoozes on the tabletop. Paintings, drawings and prints depicting scenes with a pasglas may be regarded as warnings against moral decay as well as sultry love.

Here the cone-shaped pasglas also allegorizes a phallic symbol, boldly held by the man with his right hand as he watches the approaching elder woman.

Pieter Nolpe engraved after Pieter Jansz. Quast and Adriaen Brouwer as well. One of the most striking examples by Nople after Quast is the engraving and etching "Drinking peasants and a scatting boy".[5]

The signature comes very close to the signed and dated drawing "Mocking of the Spaniard" in the coll. Custodia/Frits Lugt, Paris.[6]